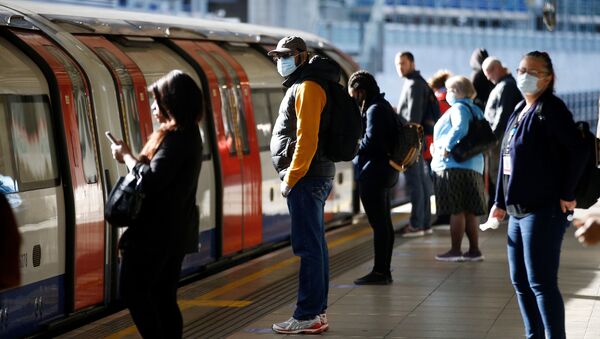 Mohamed Elmaazi
All materialsWrite to the author
Mass deforestation, industrialised animal agriculture and reductions in biodiversity are among a number of factors which increase the likelihood of the emergence and spread of dangerous pathogens such as the coronavirus disease 2019, explains scientist Dr Rob Wallace in an exclusive interview with Sputnik.

Evolutionary Epidemiologist Dr Rob Wallace authored Big Farms Make Big Flu: Dispatches on Infectious Disease, Agribusiness, and the Nature of Science in 2016, which predicted an escalation in global pandemics like those caused by Swine Flu, SARS and MERS. His work involves analysing the historical and geographical basis for the origin and spread of viruses.

Dr Wallace received his Ph.D. in biology at the CUNY Graduate Center, and did post-doctorate work at the University of California, Irvine, with Walter Fitch, a founder of molecular phylogeny. He is a Visiting Scholar at the Institute for Global Studies, University of Minnesota and has consulted with the Food and Agriculture Organization and Centers for Disease Control and Prevention.

Sputnik: What exactly is an evolutionary epidemiologist, and what is it that you specialise in?

Dr Rob Wallace: We all know that infectious diseases spread, but as they spread they also evolve. An evolutionary epidemiologist uses methods and concepts in population biology to describe how pathogens evolve in the course of diffusing across a landscape.

I specialise on applying principles in economic geography to explain how major threats such as avian and swine influenza, Ebola, Zika, and SARS-CoV-2 spread and evolve in response to the world as it presently is -- largely structured around circuits of capital and production.

Sputnik: Explain the main thesis of your book Big Farms Make Big Flu. How much of your work has predicted the emergence of something like the coronavirus disease 2019 (COVID-19)?

Dr Rob Wallace: It was only upon touring for my book back in 2017 that I thought through the best encapsulation of its thesis: As we industrialise the production of food, we also industrialise the pathogens that circulate among our livestock and crops. This mode of food production, producing, in livestock, cities of monoculture hog and chickens and other livestock and poultry around the world, is selecting for pathogens that are deadlier, more infectious, and of a wider diversity.

Now, that description accounts for pathogens that have made their way to the intensive farms within the spatial orbits of many a city. At the other end of regional production circuits, pathogens oft-spill directly from increasingly encroached-upon forests and the wild animals there, the reservoirs of exotic pathogens to which few humans have been exposed.

When we log, mine, or replace primary forest with plantation agriculture, we simplify the forest in such a way that deadly pathogens previously bottled up in wildlife are able to spring free.

Sputnik: You've co-authored an article arguing that the "failure to prepare for and react" to the COVID-19 outbreak have been decades in the making. Can you explain what you mean by this?

Dr Rob Wallace: Pandemics are mirrors. They tell a society its status. Over the past forty years, public health in the U.S., for instance, has been both neglected and monetised to the point that what was a social commons is largely individualised at the point of contact with insurance companies that may, or may not, pay for a treatment.

A pandemic pathogen doesn't subscribe to that model of intervention. Indeed, as we already see, COVID-19 is affecting the poorest and most oppressed to the point that it overloads health systems so that the health needs of everyone else other than the very richest are affected as well. For systems so interested in privatising every part of society, the most basic truisms of human community, such as the health of everyone is interconnected, are appearing such a shock.

The U.S.'s ruling class cannot recognise itself in the pandemic save in passing off the worst damage upon the 99%.

Sputnik: To what extent has the preparation for a global pandemic and handling of the current crisis been lacking?

Dr Rob Wallace: Upon bird flu H5N1 in 1997 and again in 2003, the various U.N. health agencies --WHO, [Food and Agriculture Organization], [International Organisation of Employers] -- put their territorialism aside and began to work together through how the health of wildlife, livestock, and humans are interconnected. So both the scientific community and many a health officer placed the possibility of a pandemic front and centre.

But governments worldwide treated every subsequent outbreak as some new and unconnected shock: SARS-1, H1N1 (2009), MERS, Ebola in West Africa and the Congo, Zika, and so on. Each outbreak was treated as an emergency at the expense of discussing and responding to the structural causes shared across the series of outbreaks.

There are many such causes, but the big one is treated as much a part of our world as gravity or the sun. Centres of capital the world over are funding deforestation and development on forest frontiers across the world, expanding the interface between animal disease reservoirs and newly placed livestock and the labour tending them.

An increasing diversity of pathogens are now spilling over and they have much clearer shot migrating out of the deepest forests to local regional capitals with easy access to the global travel network. But none of the public health staff are empowered to talk about or act upon the "c-word" driving these outbreaks. It is the unspeakable prime directive at the heart of global political economy. And so scientists are stuck with the impossible task of merely cleaning up after the epidemiological messes of the very system producing these outbreaks.

Sputnik: What, in your opinion, needs to be done in order to ensure the likelihood of future outbreaks is reduced as well as sufficiently mitigating against them when they do occur?

Dr Rob Wallace: Responding with proper programs in public health, including the right supply of hospital capacity and PPE [Personal Protection Equipment] and antivirals and employment insurance, are all necessary. Seems trite, but many of the richest industrial countries have flat-out failed in such basics. A lack of resources wasn't the problem. The political class's refusal to pay for them under the most Malthusian of justifications is the revulsion to blame.

Bigger picture, but not unrelated, we must also change our very way of social reproduction or how we reproduce our societies generation to generation. We must reintegrate humanity into the ecologies we share with other creatures in such a way that we accept, and respond to, the consequences of appropriating the resources we need to survive as a species. We must end expropriating land and labour to the point that capital can get away with externalising the worst costs of production -- climate change, pollution, labour morbidity, land grabs, declines in nutrition, and pandemics, among many other damage--onto everyone else. That selects for the utterly worst behaviours possible.

It's a sociopathic way of living that requires radical recalibration. Otherwise, given the scale of our present civilisation, we threaten to end society as we know it the world over. That might involve both the bang of a pandemic that kills a billion people and the whimper of drawn-out pulses in shifts in climate. We deserve better. We can use our brilliant collective minds and our everyday-apparent compassion to readjust our shared community to another mode of living entirely. Even in the face of what seem such terrible odds. We have no choice otherwise.