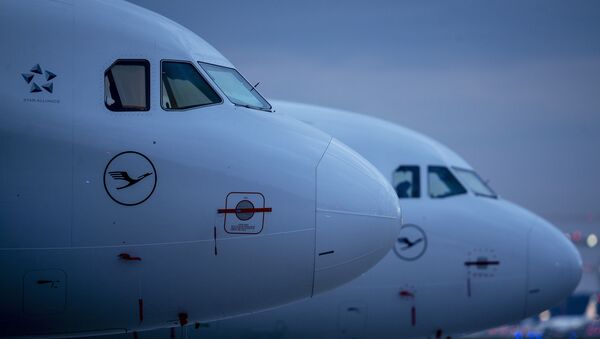 © AP Photo / Michael Probst
Subscribe
BERLIN (Sputnik) - The Lufthansa Group aviation company plans to offer 1,800 weekly flights to more than 130 global destinations to customers from the end of June, the group said in a press release on Thursday.

Germany, France and Austria, among others, have already announced plans to start relaxing border controls from mid-June, as the spread of COVID-19 is slowing in most European countries.

"With over 106 destinations in Germany and Europe and more than 20 intercontinental destinations, the range of flights on offer for all travellers will be greatly expanded by the end of June", the airline group said in a press release. The first batch of flights will be available for reservation in the booking systems today, 14 May. By the end of June, the Lufthansa Group airlines plan to offer around 1,800 weekly roundtrips to more than 130 destinations worldwide".

Lufthansa is planning to resume flights from Frankfurt, Dublin, Vienna, Brussels, Zurich, Bucharest, Kiev, and Krakow, among others. The rest of the airlines which are part of the group, including SWISS, Austrian Airlines, Brussels Airlines, and Eurowings, have also announced the resumption of flights to different destinations.

Germany has confirmed 933 new COVID-19 cases over the past 24 hours, with the total count reaching 172,239, the Robert Koch Institute said on Thursday. The death toll has grown by 89 to 7,723 people within the same period of time.