Analysts: At Least 4 GOP Members, 2 US Entities to Be Put on China's Sanction List Over Covid Suits 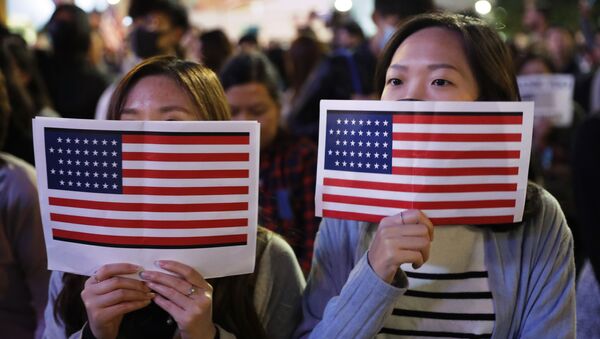 © AP Photo / Vincent Thian
Subscribe
International
India
Africa
China is extremely dissatisfied with the abuse of litigation by the US over the COVID-19 epidemic and is mulling countermeasures against US individuals, entities and state officials such as Missouri's attorney general Eric Schmitt, who filed lawsuits against China to seek damages over the pandemic, sources close to the matter told the Global Times.

At least four US Congress lawmakers and two entities will be put onto China’s sanction list, according to analysts.

China won't just strike back symbolically, but will impose countermeasures that will make them feel painful, analysts said.

Some US congressmen and state governors as well as attorneys who are also GOP hawks have filed lawsuits against China, alleging that the Chinese government mishandled the epidemic, which has led to severe economic consequences.

At least six lawsuits have been filed against China in US federal courts, while some lawmakers have also introduced bills to make it easier to sue China despite legal hurdles and no realistic possibility for US states to achieve their aim. Missouri became the first state in the US to sue the Chinese government. Missouri Attorney General Eric Schmitt filed the lawsuit on April 21, claiming that China did little to stop the spread of the virus and "lied to the world about the danger and contagious nature of COVID-19," claiming that Missouri residents may have suffered tens of billions of dollars in economic damage.

Mississippi Attorney General Lynn Fitch followed suit in a move that was slammed as “ridiculous” and “absurd” by Chinese officials and experts. The suit calls for Mississippians to be allowed to seek justice and hold China accountable, Fitch was quoted as saying in a report by Fox News on April 25.

Those Republicans who have been harshly criticizing China and inflaming this “holding China accountable” political farce will face severe consequences, sources said, noting that the aftermath will also impact the upcoming November elections, while business and trade between Missouri and China will be further soured.

Senators who also actively pushed the anti-China bill over the pandemic include Josh Hawley – a Missouri Republican – who came up with the "Justice for Victims of COVID-19 Act" in mid-April which would take away China's sovereign immunity and permit US citizens to sue the Chinese government for downplaying COVID-19 information. Arkansas Senator Tom Cotton and Texas Republican Dan Crenshaw also introduced legislation that would allow Americans to sue China over the coronavirus.

On April 16, Cotton introduced legislation that would allow Americans to sue China in federal court to recover damages for death, injury, and economic harm caused by the coronavirus. Specifically, the bill would amend the Foreign Sovereign Immunities Act to create a narrow exception for damages caused by China's handling of the coronvirus outbreak. A day later, Republican Chris Smith of New Jersey proposed the likewise bill to strip China of its sovereign immunity and allow Americans to sue the Chinese government, according to his official website. Republican Jim Banks also joined the blame game in condemning the Chinese government's handling of the epidemic outbreak.

For those lawmakers, anti-China deeds have almost fully covered their daily routines. In fact, Hawley introduced legislation along with another Republican Rick Scott on March 12 to ban all federal employees from using TikTok on government devices. Smith has also been a frequent instigator on China-related topics, particularly on so-called human rights issues. In March 2019, Smith introduced legislation to tackle China's political influence in the US by saying "Beijing's influence operations are sophisticated and threatening."

Other GOP lawmakers have been actively pushing forward a bill that would facilitate suing China, such as one introduced by GOP Senator Marsha Blackburn from Tennessee, Martha McSally from Arizona and Lance Gooden of Texas. Also, some Republicans in New Jersey – Jim Holzapfel, Greg McGuckin and John Catalano – are introducing a resolution urging US President Donald Trump and US Congress to pass a bill that lets US citizens sue China, media reported.

US lawyer Larry Klayman and his advocacy group Freedom Watch, along with Texas company Buzz Photos, also filed a lawsuit against the Chinese government. The plaintiffs have sought $20 trillion from China.

China has repeatedly stressed that cooperation between China and the US is mutually beneficial while always maintaining the hope that bilateral relations will develop in a healthy direction. However, we cannot back down again and again and tolerate some people who have endlessly compromised China-US relations, analysts said.

"We must resolutely crack down on those politicians who, for no reason, undermine China-US ties for their own political benefits. For those who promote anti-China legislation, we need to find out what the business ties are between those officials or their families with China," Yuan Zheng, a research fellow at the Chinese Academy of Social Sciences (CASS), told the Global Times on Wednesday.

"We can't just strike back symbolically, but should impose countermeasures that could make them feel the pain," Yuan said.

China was the third-largest export destination for Missouri, after the UK and Canada, for goods and services in 2019 worth $1.1 billion and $775 million, respectively. Some of the top goods exported to China included oilseeds and grains, meat products, and medicine.

Missouri, together with other states like Michigan, South Carolina and Texas, had taken measures to make it easier for Chinese investment to come in and boost local job growth years ago. For example, in 2013, one week before Chinese company Shuanghui purchased Smithfield Foods, the Missouri legislature amended a law clearing the way for approval.

Hong Lei, then Chinese Consulate General in Chicago, said in a speech in 2017 that Chinese companies invested more than $1.1 billion in Missouri, creating 4,500 jobs.

China could impose the countermeasures on the relevant states represented by those anti-China lawmakers, including measures targeting trade and exchanges, Yuan said. “Those officials should be held responsible for what they said. However, we need to strike a balance between punishing them and not diminishing them all,” he added.

Some Missouri companies, for example, have long-term investments in China and are likely to feel severe consequences if China strikes back with punitive measures in response to the coronavirus lawsuit. Emerson Electric, which was founded in Missouri, has significant operations in China, and just opened its largest overseas research and development center in Suzhou, East China’s Jiangsu Province in 2019.

This article originally appeared on The Global Times website.