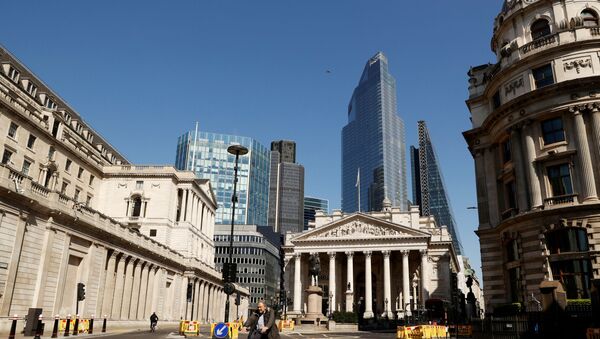 The UK government has been presented with a range of unpopular options to recoup the budget deficit caused by a surge in government spending and low revenues resulting from the coronavirus lockdown. Those are said to include tax raises, spending cuts, and a block on bigger state pensions and wages in the public sector.

The United Kingdom may face a budget deficit of £337 billion ($413bn) because of the impact of COVID-19 containment measures on the economy, according to Treasury estimates seen by the Telegraph.

The document, drawn up for new Chancellor of the Exchequer Rishi Sunak and dated 5 May, views that figure as the "base-case scenario". The "optimistic" scenario would see a $256-billion gap in public finances, and the worst-case model predicts a $632-billion deficit.

This assessment is even more dire than last month's forecast by the Office for Budget Responsibility, which warned that the government's deficit could hit $335 billion and that the economy could shrink by 35 percent in the second quarter of 2020.

To plug that hole, the government could raise taxes or cut spending in a move that would raise between $30.6 billion and $37.6 billion (a figure equal to a 5-percent increase in the basic income tax rate), the newly-leaked documents suggest.

Another option could be to abandon the so-called triple lock on state pensions - a mechanism introduced in 2011 to guarantee that basic state pension will rise by at least 2.5 percent every year. This could save up close to $10 billion a year, but would go against Boris Johnson's December election pledge to retain the triple lock and not to raise taxes.

Treasury officials also reportedly told Chancellor Sunak that the government may freeze pay raises for workers in the public sector, a measure that could produce savings of around $8 billion over the next 3 or 4 years.

The document is understood to be a summary of options the government can access to handle the budget deficit, rather than a recommendation of any particular one. It advises, however, that recovering that money "through tax revenue raisers would be very challenging without breaking the tax lock", according to The Telegraph.

It also warns that the UK may face a "sovereign debt crisis" if the economy doesn't recover soon and that the government should "stabilise the debt-to-GDP ratio and prevent debt from continuing to grow on an unsustainable trajectory".

The leak came just hours after Rishi Sunak announced another step down the public spending road, namely an extension to the job subsidy scheme for coronavirus-affected workers till the end of October. Under the scheme, which was originally meant to end at the end of June, furloughed workers receive 80 percent of their monthly wages up to £2,500 ($3,000).

Faced with dark economic prospects, Boris Johnson on Sunday announced a phased easing of lockdown restrictions in England, which wasn't supported by devolved governments in the rest of the UK.