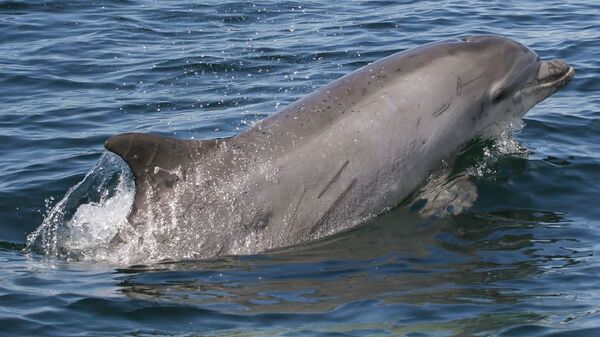 New Delhi (Sputnik): After the Coronavirus scare pushed humans inside their homes, stories of Earth’s ozone layer, water quality and wildlife ecosystem miraculously reviving in all its glory are hogging the headlines. In India, birds and animals such as flamingoes and dolphins have re-appeared after years without sightings.

Despite lockdown, it seems some people are in no mood to let nature heal on its own: on Wednesday, screenshots of a horrible video showing a bunch of people torturing a baby dolphin in India’s West Bengal state began surfacing on social media.

The heart-wrenching video was first shared online by a user Rafiku Saihk. It showed a group of three men stretching and fidgeting with the snout and tail of the baby dolphin, which looked merely months old.

A bunch of men caught a baby #dolphin and then tortured it on camera in #Kolkata.

​The location where the video was shot remains unclear, but reports claim it comes from somewhere between Kolkata and Burdwan in West Bengal.

The gruesome video instigated famous Indian environmentalist Biswajit Roychowdhury to lodge an official complaint with the forest authorities in the area.

An investigation is reportedly underway.

Netizens have also expressed anguish over the video.

Torturing a baby dolphin only a couple of weeks old. Seriously sociopathic! Let’s hope they’re caught soon. Apparently they did release the battered & bloodied calf, but it wouldn’t have a chance with no Mum. Scumbags🤬@_AnimalAdvocate @RobRobbEdwards https://t.co/HAawDRuAfa

It seems lockdown hasn’t been able to root out the ‘viruses’ responsible for the disappearance of the dolphins from river in first place. Young #gangetic #Dolphin was literally tortured to death by bunch of young men https://t.co/L4S8OiThyd

NMCG has been assured by the W.B. Forest Dept. that the dolphin has been released into the river & due inquiry is being made. Awareness program will also be taken up in the area. https://t.co/mqMFVmIlPY

​Often called the “doggies of water”, dolphins have begun re-appearing in different parts of the Ganges – including the Hooghly river. The Ganges dolphins have a population of about 5,000, and are found in the Ganges and its tributaries in Nepal, India, and Bangladesh. The aquatic mammals are considered “critically endangered” in India and haven’t been spotted in decades.