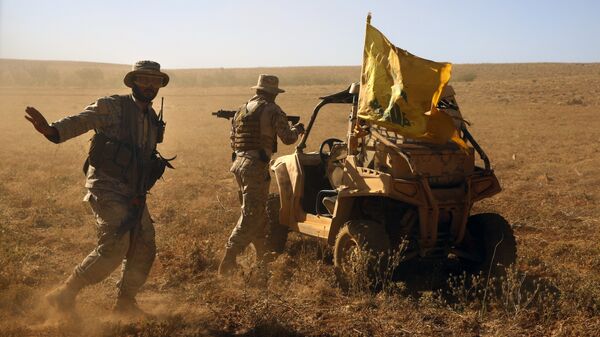 © AP Photo / Bilal Hussein
Subscribe
The Lebanese political and militant group leader’s remarks come in the wake of comments by Israel’s defence minister last week warning that Tel Aviv would not stop its operations in Syria until Iran and its proxies left the country.

Outgoing Israeli Defence Minister Naftali Bennett’s claims about Iran’s redeployment of forces away from the border with Syria or outside the country entirely due to Israeli military operations are a bald-faced lie, Hezbollah leader Hassan Nasrallah has claimed.

“In Syria there is an imaginary battle that Israel is waging called ‘not allowing the presence of Iranian troops in Syria’,” Nasrallah said in an address on Lebanese television network al-Manar on Wednesday.

“There have been Iranian advisors in Syria since 2011, but there are no Iranian military forces there,” Nasrallah added.

Syria, the official said, has sufficient support from its allies not to require the constant presence of regular Iranian forces.

“The Israeli Minister of War is lying to his fans and the world when he talks about victories in Syria, which are fictitious victories,” Nasrallah stressed, adding that Tel Aviv had placed its bets on anti-Damascus rebels in the country’s south in 2011, but lost the war.

Nasrallah also indicated that recent Israeli attacks in Syria would not prompt Hezbollah to withdraw its forces from the country.

Nasrallah’s comments follow remarks by outgoing Israeli defence minister Naftali Bennett last week warning Iran that Tehran “has nothing to do in Syria” and that Israel “won’t stop” its operations in the country “before they leave Syria.”

Bennett accused Iran of “trying to establish itself on the border with Israel to threaten Tel Aviv, Jerusalem and Haifa,” but added that recent Israeli strikes have forced the Islamic Republic to have “somewhat lessened their activities. They have redeployed some of their forces away from the north to other places in Syria, or even outside Syria, as Israel has stepped up its operations against them,” he said.

Bennett’s comments came following reports last week that renewed Israeli airstrikes had killed 14 Iranian backed fighters in Syria. Israel has conducted hundreds of airstrikes on Syrian territory in recent years on what it claims are Iranian and proxy forces posing a threat to a Jewish State. Iran says its military presence in Syria is limited to advisers acting at Damascus’s invitation, and that its operations have been limited to fighting terrorists, providing logistical assistance and clearing minefields.

Hezbollah militia have been present in Syria since 2012 after being invited by Damascus to support the government against an onslaught of mostly jihadist Sunni Islamist militias. The militia has taken part in many of the major strategic operations spearheaded by Syrian Army forces over the years, and withdrew some of its forces back to Lebanon in July 2019 after most of the terrorist groups were defeated or evacuated to Idlib. Hezbollah is thought to have lost up to 1,500 of its fighters in the eight-year-long war.

000000
Popular comments
Fictitious victories by a fictitious country.
Purifier
13 May 2020, 21:03 GMT8
000000
What business is it of the zionist imbeciles who the Syrian government allows into their country? Mind your own fkn business inbred, paranoid clowns.