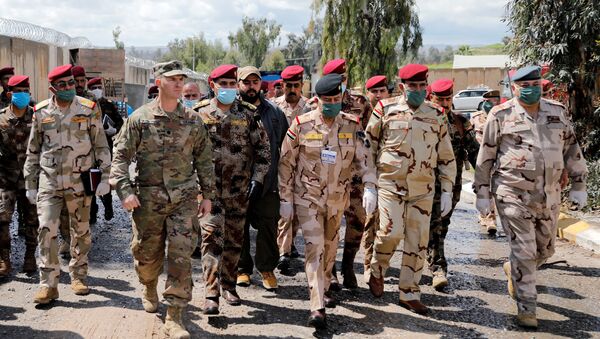 WASHINGTON (Sputnik) - The Daesh* terrorist group wages a low-level insurgency in Iraq and Syria but is unable to gain and hold territory despite decreased counteractions amid the coronavirus pandemic, Inspector General for Operation Inherent Resolve said in a quarterly report on Wednesday.

“CJTF-OIR [Combined Joint Task Force - Operation Inherent Resolve] reported that ISIS [IS] continued to wage a “low-level insurgency” in both Iraq and Syria this quarter, but remains unable to hold territory and continues to rely on small-arms attacks,” the report said.

In Iraq, these attacks were concentrated in mountainous and desert provinces north and west of Baghdad. In Syria, the majority of attacks occurred in Dayr az Zawr, Hasakah, and Raqqah provinces in the eastern part of the country.

“ISIS [IS] claimed 187 attacks in Iraq and Syria in January and February 2020. This represents a decrease from November through December 2019, when ISIS claimed 382 attacks across the combined joint operating area - an attack level CJTF-OIR said increased due to a global attack campaign to avenge [its leader Abu Bakr] al Baghdadi’s death,” according to the report.

The inspector general noted that the coronavirus spread “significantly reduced” military operations during the first quarter. Iraqi Security Forces paused training activities and Syrian Democratic Forces paused operations against IS in response to the pandemic, the report said.

*Daesh (IS/ISIL/ISIS) is a terrorist organisation banned in Russia.