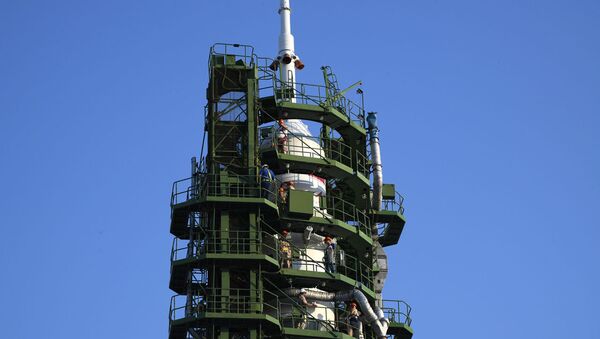 MOSCOW (Sputnik) - The Soyuz-7 rocket for blastoffs from the Sea Launch floating spaceport is planned to be equipped with the new Fregat-SBU upper stage, the director-general of the upper stage developer - Lavochkin Research and Production Association - Vladimir Kolmykov said.

“The use of the Fregat-SBU upper stage as part of the Soyuz-7 space rocket from the Sea Launch complex owned by the S7 Space Transportation Systems company is being considered. At the end of 2020, the development of a preliminary design will be completed. The first launch of the Fregat-SBU upper stage using the Soyuz-7 launch vehicle is planned to be conducted in 2025", Kolmykov said.

Earlier reports said Russian state space corporation Roscosmos set a task to its enterprises to conduct an economic assessment of the resumption of the Sea Launch operation - to estimate the costs of repairing the floating spaceport and the creation of a new Soyuz-7 rocket. Launches are planned to be resumed from 2024.

In March, the Sea Launch Commander command ship arrived in Slavyanka in the Primorsky Territory in Russia's Far East, according to global ship-tracking website https://www.marinetraffic.com.

The vessel, along with the Odyssey launch platform, is a part of the Sea Launch project, developed as a joint venture of companies from Russia, Ukraine, the US and Norway in 1995. The project was used to deploy nearly three dozen commercial satellites into orbit between 1999 and 2014. In 2014, the joint venture was abandoned. In April 2018, the project was purchased by the private Russian airline and aerospace company S7 Group.