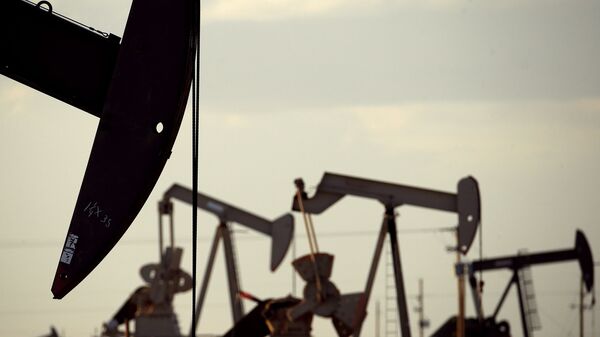 © AP Photo / Charlie Riedel
Subscribe
International
India
Africa
WASHINGTON (Sputnik) - President Donald Trump on Tuesday predicted in a tweet a rebound of employment by US energy producers and suppliers due to a reduction in oil production in Saudi Arabia while the benefits of record low gasoline prices give American producers a break.

​The tweet made no mention of the novel coronavirus (COVID-19) measures that have effectively shut down the US economy and only referred to the resulting economic downturn indirectly by mentioning employment by US energy companies. Those companies have cut jobs amid a price war between Russia and Saudi Arabia that has driven oil prices to rock bottom levels.

Energy woes have complicated efforts to restart the US economy following months of stay-at-home orders that sent unemployment rates rising to the Depression-era level of 14.7 percent in April.

Saudi Arabia’s energy ministry directed Saudi Aramco to reduce its crude-oil production by an extra, voluntary 1 million barrels per day beginning in June, a Saudi Ministry of Energy official told the Saudi Press Agency (SPA), according to news reports earlier in the week. The SPA said the move brings the total Saudi output cut to around 4.8 million barrels per day from the April production level.