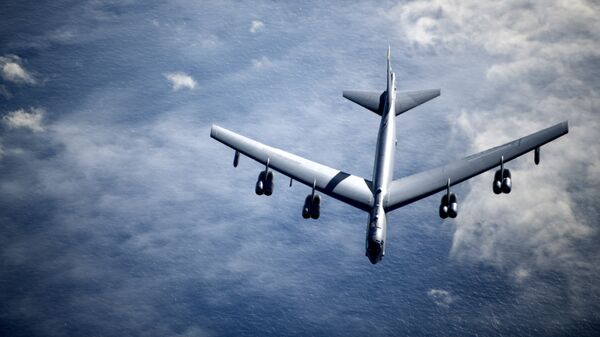 In its latest power posturing amid the COVID-19 pandemic, the US dispatched B-52 Stratofortress and B-2 Spirit bombers on simultaneous missions to Europe and the Pacific, all while B-1B Lancers continue to drill in the East and South China Seas. Without a hint of irony, the same crafts are being used at home to pay tribute to health care workers.

On May 7, a total of six B-2 Spirit and B-52 Stratofortress bombers were dispatched from US air bases to the European and Indo-Pacific Command areas on what US Strategic Command (STRATCOM) called a demonstration of the “readiness and global reach of its long-range strategic bombers.”

According to a Monday news release by STRATCOM, two B-2 stealth bombers from Whiteman Air Force Base in Missouri, two B-52H Stratofortresses from North Dakota’s Minot Air Force Base and two B-52Hs from Louisiana’s Barksdale Air Force Base together comprised the globe-spanning exercise. The command did not state which aircraft went to which theater, or to where in the European or Indo-Pacific Command areas of responsibility the aircraft traveled. 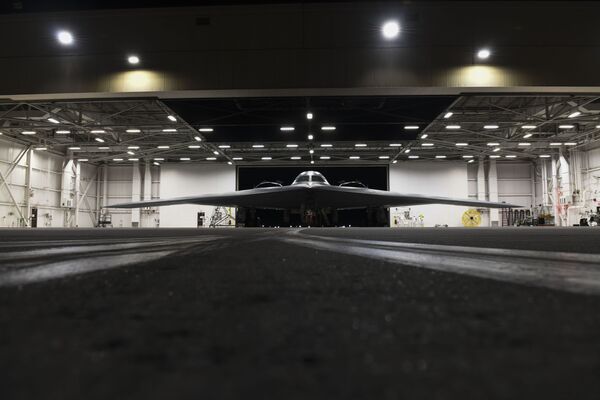 “This dynamic employment of USSTRATCOM’s long-range bombers and supporting aircraft showcased the United States’ ability to conduct synchronized strategic deterrence anywhere in the world with a ready, lethal force,” STRATCOM said. “Despite the continued outbreak of COVID-19, we are committed to our mission in all domains (air, sea, land, space, cyber), and to the readiness of our allies and partners.”

Commonly called just the stealth bomber, the B-2’s black flying wing silhouette is unmistakable, and the B-52’s reputation for packing incredible bomb loads since the US war in Vietnam is unparalleled. Both aircraft are certified to carry nuclear weapons. 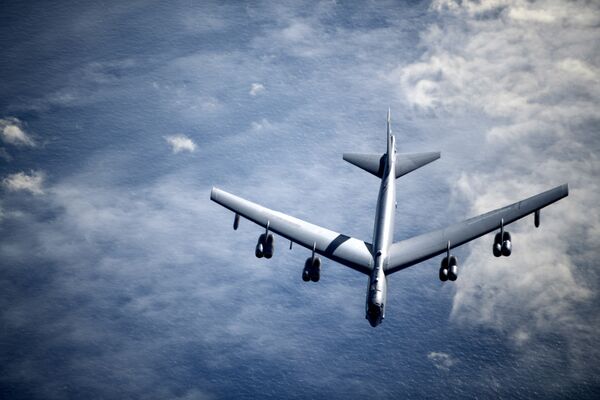 A U.S. Air Force B-52 Stratofortress breaks away from a KC-135 Stratotanker from the 100th Air Refueling Wing, RAF Mildenhall, England, after receiving fuel during a strategic bomber mission, May 7, 2020.
© Tech. Sgt. Emerson Nuñez

The day prior, two B-1B Lancers, a supersonic strategic bomber designed for high-speed nuclear strikes but now modified for toting long-range missiles, drilled in the South China Sea. The jets are two of four Lancers deployed earlier this month to Andersen Air Force Base on Guam in the Philippine Sea, following a showdown near the Paracel Islands that saw Chinese warships eject a US destroyer from the area.

US Pacific Air Forces (PACAF) described their mission as “ strategic deterrence … to reinforce the rules-based international order in the Indo-Pacific region,” a Pentagon euphemism for China’s steady expansion of power and influence in ways that undermine Washington’s world-hegemonic position established after the end of the Cold War. 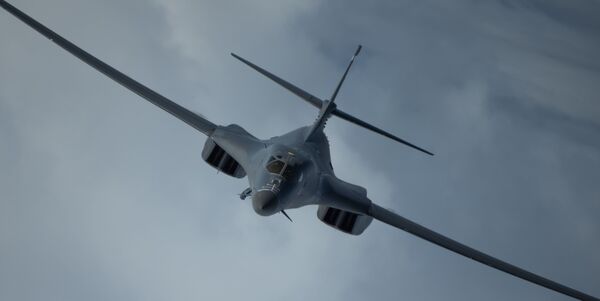 A 9th Expeditionary Bomb Squadron B-1B Lancer conducts a training mission in the vicinity of Japan where they integrated with Japan Air Self Defense Force assets, May 12, 2020.
© Senior Airman River Bruce

Particular ire has been cast at China’s territorial claims in the South China Sea, which the US and its allies regularly and conspicuously disregard by conducting Freedom of Navigation Operations (FONOPs) and sailing through Beijing’s claimed territorial waters. Five other nations have claims in the waterway overlapping China’s, and the US refuses to recognize islands reclaimed from the sea as legitimate territory.

On Tuesday, PACAF announced a second Lancer drill in conjunction with Japan Air Self-Defense Force assets in the East China Sea, where China claims the Japanese-controlled Senkaku Islands, and near Taiwan, which Beijing regards as a rebellious province and which receives military aid from Washington to maintain its autonomy.

However, these missions are far from unique. Washington has dispatched Lancers on several long-ranging missions in recent weeks, flying from South Dakota to locations off the coast of Russia, China and the Democratic People’s Republic of Korea to drill with partner nations including Japan, Denmark and Estonia.

The flights are part of what the Pentagon calls its new "dynamic force employment" model, a shifting of regular force deployments designed to keep American adversaries on their toes. Like Thursday’s STRATCOM mission, the flights are intended to show “strategic predictability with persistent bomber presence,” in line with the Trump administration’s shift toward “inter-state strategic competition” with Russia and China.

In a sharp twist of irony, the same bombers being used to intimidate Washington’s enemies and project military strength are also being used in flyby events across the country to express “tribute” to health care professionals putting their lives at risk to treat victims of the COVID-19 novel coronavirus pandemic that has killed more than 80,000 Americans.

While the US Navy’s Blue Angels and the US Air Force’s Thunderbirds performance teams have made the most high-profile tribute flights, a host of other military jets are being used as well. Over Louisiana’s Baton Rouge and New Orleans, two B-52s accompanied two F-15s on a flyby, resulting in a book-sized panel falling from one of the ancient bombers.

​B-1B Lancers have been sent on flyovers in South Dakota and Texas, and a B-2 Spirit appeared over St. Louis, Missouri, and Springfield, Illinois, on a tribute flight. The Quincy Institute for Responsible Statecraft think tank reported the flights “cost about $60,000 an hour, roughly the same price as 60,000 N-95 masks or 20,000 of some COVID-19 test kits. Medical workers must be very grateful.”

If that weren’t bad enough, the Department of the Air Force has taken to calling the flyover events “Operation American Resolve,” similar to the Pentagon’s name for the US war in Iraq and Syria, known as “Operation Inherent Resolve.”

However, even the pandemic itself is now being weaponized against China for US foreign policy ends. As Sputnik has reported, figures across the Trump administration, including the president himself, are increasingly posturing toward “holding China accountable” for the COVID-19 outbreak, claiming Beijing purposefully orchestrated a global pandemic and the crashing of the US economy, and even floating the idea that Chinese scientists created the virus in a weapons lab. White House Trade Policy Director Peter Navarro, whose books include "Death by China" and "The Coming China Wars," has recently indicated retaliatory tariffs may soon follow.