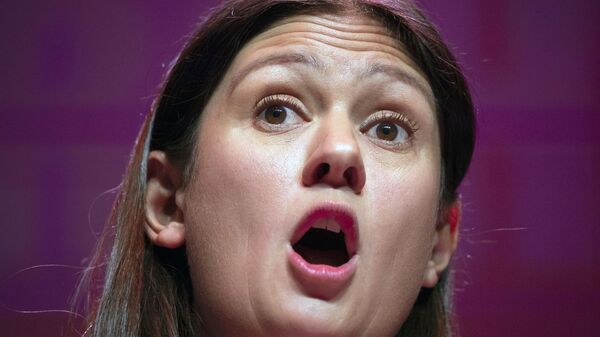 © AP Photo / Jane Barlow
Subscribe
The United Kingdom last year sought the extradition of Anne Sacoolas, the alleged killer of 19-year old Harry Dunn, from the US. Despite international demands for her arrest, the request was denied by the Trump Administration.

Shadow Foreign Secretary Lisa Nandy accused the UK Foreign Office on Tuesday of “clear and repeated failings” following the circulation of reports that an Interpol Red Notice had been issued for the alleged killer of British citizen Harry Dunn.

Nandy called the decision to permit 42-year-old US citizen Anne Sacoolas to leave the UK after a fatal road crash which led to Dunn's death a “clear violation of legal protocol”.

Speaking after an Interpol Red Notice had been issued for Sacoolas, Ms Nandy called it an "important first step" towards secure justice for Harry Dunn and his family.

She demanded that Foreign Secretary Dominic Raab come to the House of Commons to answer questions regarding initial failings in the case and the government's plan to resolve the situation with its US counterparts.

​The strong statement from Nandy indicates that the Labour Party position remains unchanged in its criticism of the government over its handling of the case, however there are stark shifts in detail from the previous opposition leadership.

In February, former Labour leader Jeremy Corbyn called for the resignation of Prime Minister Boris Johnson over the Harry Dunn scandal after suggesting that the Sacoolas was being "shielded" from justice because she was in the CIA.

Mr Dunn was killed after his motorbike collided with a car driving outside of a US military base in Northamptonshire in August 2019.

Sacoolas, the wife of a US intelligence official who was based in RAF Croughton, sought diplomatic immunity to secure her return home, leading to international pressure for her to face justice.

She was charged with causing death by dangerous driving in December but the Home Office's extradition request was rejected a month later.

US Secretary of State Mike Pompeo claimed that the US' decision over the matter was "final" and Sacoolas was given immunity from criminal prosecution.

While a Red Notice is a request to law enforcement across the world coordinate to locate and provisionally arrest a person pending extradition, surrender, or similar legal action, it is not the same as an international arrest warrant.

000000
Popular comments
Will the UK government put a price on her head. After all the UK government never blinked an eye when the US President put a price on the head of Venezuela's President.
amike
12 May 2020, 19:29 GMT4
000000
Well she does now have an Interpol International Arrest Warrant. The moment she leaves the country . She can be arrested on the spot. If she had a functional mononeuron. She should face up to her criminal action of murder. Coward by any other name she is and remain so for life.