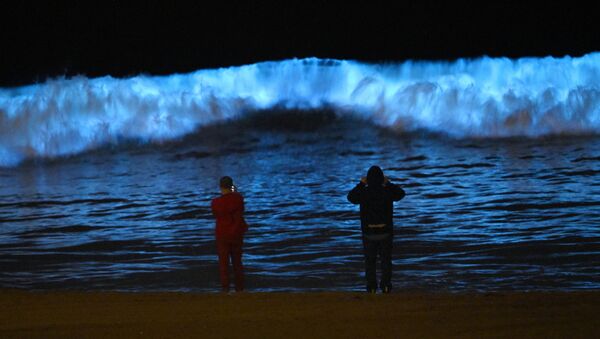 The phenomenon in question is caused by bioluminescence emitted by certain species of phytoplankton during an algal bloom event known as red tide.

A peculiar, but apparently not all that uncommon natural phenomenon was recently observed by beach goers in California as videos showing ocean waves there emitting a bright blue glow at night started popping up online.

While definitely a spectacular sight, there's actually nothing enigmatic to it as this phenomenon which is caused by bioluminescence emitted by certain species of phytoplankton during an algal bloom event known as red tide.

I got to witness a once in a lifetime phenomenon, bioluminescent algae appeared in the ocean and beaches in California. We ran down to Venice beach, when we arrived this is what we saw! I had to jump in the sea, it was glowing all around me, I literally felt like I was in Avatar! pic.twitter.com/KA43YoGLKA

Bioluminescent algae appearing on a beach in California pic.twitter.com/FIp52ioiYU

Bioluminescent waves are incredible gift to the world
by #MotherNature!

Witnessed along the coast of southern #California, its one of the most Magical Experience!

The presence of Bioluminescent Algae in the Ocean makes this possible!@ScienceMagazine@WorldAndScience pic.twitter.com/Go19OgUgSQ

As Michael Latz, a bioluminescence expert and scientist at Scripps Institution of Oceanography, explained to Newsweek, this year's red tide in California appears especially spectacular.

"The red tide is very large, reaching from Acapulco to the south to Los Angeles to the north," he said. "It is also the strongest in recent history, most likely in the last 50 years."

The event in question seemed to captivate the attention of quite a few social media users.

so this is real?? pic.twitter.com/M7JY2iVoPa

This reminds me of avatar pic.twitter.com/eR8N3RdyFV

Swam in it once in Florida. Beautiful and magical

Some, however, were quick to point out that the red tide may be rather harmful to marine life.

yes bioluminescent is pretty for us, but not for the marine life. Sorry to break the fun, but please do read this little sharing. in the meantime, stay safe guys.https://t.co/oR4BoYJ69E pic.twitter.com/T6XIMwADWN