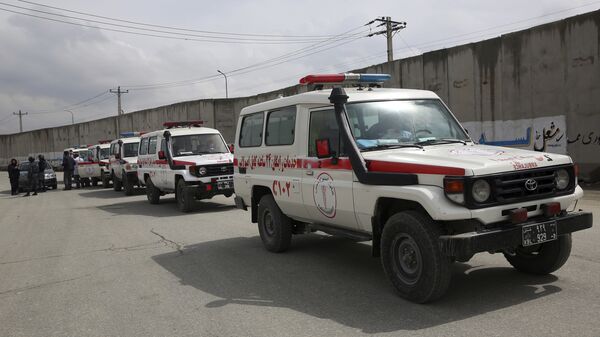 MOSCOW (Sputnik) - An explosion occurred at the entrance to a hospital in the Afghan capital of Kabul, and militants then entered the building, 1TV broadcaster reported on Tuesday, citing a doctor working at the hospital.

The death toll from the attack on a hospital in Afghanistan's Kabul has increased to 14, and the number of injured people has grown to 15, 1TV broadcaster reported on Tuesday, citing the Interior Ministry.

It was earlier reported that the attack resulted in five fatalities and four injuries.

Earlier in the day, gunmen broke into the hospital, after a suicide bombing attack was conducted at the entrance. Only some of the staffers of the hospital, supported by the Doctors Without Borders international humanitarian organization, managed to leave the building. Security forces have already neutralized all the militants.

Several hospital staff including doctors are believed to be trapped inside the hospital. Afghan security forces have arrived at the scene now. #Kabul #Afghanistan pic.twitter.com/TH0Q8MURQ8

​Police have confirmed to the local media that a number of assailants have attacked a hospital in Kabul's PD 13.

​Police special units have taken position in the area.

Eyewitnesses said that there were two explosions near the hospital, located in the Dasht-e-Barchi area, also noting "small arms fire." They did not provide any information about doctors. According to previous media reports, only some staffers have managed to leave the building.

The Afghan Interior Ministry confirmed the incident, saying that gunmen entered the hospital and opened fire there.

"Unfortunately, a group of suicide bombers attacked a hospital in the western part of Kabul city. Afghan forces are in the area. So far, 40 civilians have been rescued. Efforts are being made to rescue all the people and to return the situation to normal," Tariq Areen, a spokesman for the ministry, said in a statement.

The Taliban movement said in a statement that it was not behind this attack.

The hospital under attack in Kabul is funded by Doctors Without Borders.