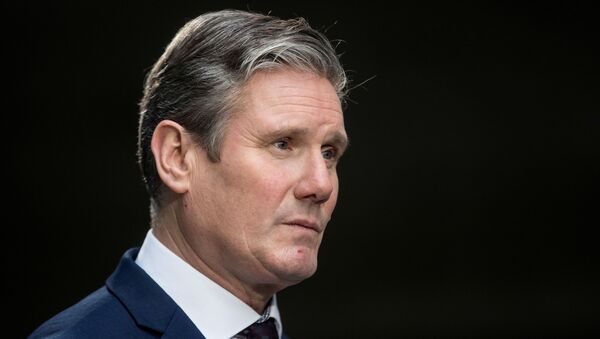 © REUTERS / Simon Dawson
Subscribe
The United Kingdom is set to end the transition period and fully leave the European Union at the end of the year. But as the coronavirus (Covid-19) pandemic spreads across the country, opposition figures are pressuring the government to seek an extension.

Labour leader Keir Starmer rejected calls on Monday for an extension to the Brexit transition period, saying that he would prefer that "negotiations were completed as quickly as possible" but added that he thinks that a deal by the deadline is "unlikely".

In an interview with Nick Ferrari on LBC Radio, Sir Keir said that he did not see it as practical to come to a working arrangement before December but said that the UK should wait and "see how we get on" in talks.

"The government says it's going to get negotiations and a deal done by the end of the year".

"I've always thought that's tight and pretty unlikely, but we're going to hold them to that and see how they get on. They say they're going to do it", he said.

After being pushed to clarify his position on whether he would back extending the negotiations, Starmer reaffirmed that his primary position is to "ensure" that the negotiations are "completed as quickly as possible".

"I've not called for a pause because the government says it's going to get it done by the end of the year. So let's see how they get on", he said.

"I don't think it's practical but we're a long way from December so we'll see how we get on. But the government has said we can do it within the 12 months, so let's see".

​The comment from the Labour leader follows the party's heavy defeat in the 2019 December election, in which its manifesto policy of supporting a confirmatory referendum on the UK's European Union membership is credited as one of the main reasons for the party's poll drubbing.

During his tenure as Brexit Secretary under Jeremy Corbyn, Starmer was a primary architect in formulating Labour's shift towards a second referendum position, calling for numerous extensions of Article 50.

​Talks between the UK government and the EU regarding a trade deal have faltered due to the coronavirus pandemic.

After the first two rounds of negotiations were canceled due to social distancing concerns, the meetings have now taken to digital form using video conferencing software. However, both sides remain at odds over the issues of fishing rights, human rights, state aid, and the role of the European Court of Justice.

Prime Minister Boris Johnson, after being elected last year to "get Brexit done", has ruled out an extension under any circumstances.

The European Commission has said that it would be happy to agree to an extension of the transition period, where the UK is formally outside the EU but functions as a member state.

June is the current deadline for agreeing to extend the transition period and some opposition parties, including the Scottish National Party and the Lib Dems, have urged the government to request one.

If the UK does not seek an extension, it will leave the single market and customs union on 31 December, potentially creating further economic uncertainty.