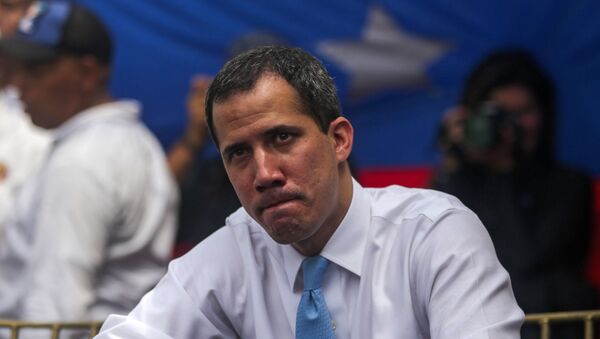 MOSCOW (Sputnik) - Venezuelan opposition leader Juan Guaido has accepted the resignation of two of his aides who are currently wanted by Caracas on charges of a botched armed incursion into the country to topple President Nicolas Maduro, Spain's EFE news agency reported on Monday, citing Guaido's office.

It comes after Venezuelan Communications Minister Jorge Rodriguez unveiled last week a 41-page contract worth $213 million between the Venezuelan opposition and private military firm Silvercorp USA to "capture/detain/remove" Maduro. The paper is believed to have signatures of Guaido himself; Sergio Vergara, a member of the opposition-controlled parliament; and Miami-based political consultant Juan Jose Rendon.

Vergara and Rendon have now stepped down as the opposition leader's aides.

On 3 May, Venezuelan authorities announced that they had scuttled an attempt of militants to infiltrate the country from Colombia on speed boats to capture Maduro. Eight suspects were killed and several captured in the counter-operation, among them two US nationals. Maduro identified them as US President Donald Trump's security guards.

Washington and Bogota have denied allegations of involvement in these events, with Colombian Foreign Ministry saying in a statement that the Venezuelan government was just trying to deflect attention from the "internal crisis" in the country.

The political crisis in Venezuela worsened after January 2019, when US-backed opposition leader Juan Guaido illegally proclaimed himself interim president of the country. Maduro, whose presidency has been supported by Russia and China, among others, has denounced Guaido as "a US puppet" who is seeking to stage a coup in Venezuela and seize the country's sovereign assets.