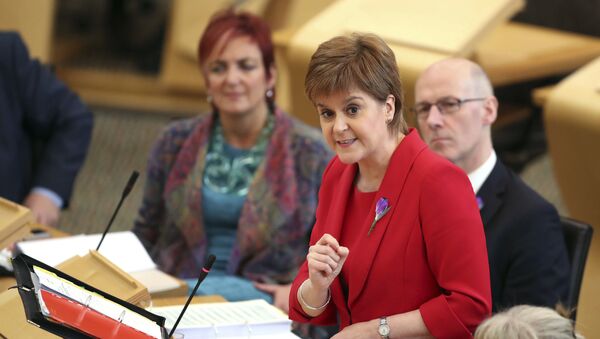 UK authorities have been engaged in a fierce debate in recent weeks over when lockdown restrictions should be lifted in order for businesses to reopen, with one side suggesting that the focus should be on the economy, while the other side argues that lifting the restrictions early may bring about a second wave of the pandemic.

Scotland’s First Minister Nicola Sturgeon has criticised British Prime Minister Boris Johnson’s decision to drop the "stay at home message" in favour of a caution to "stay alert", dubbing it catastrophic. The development comes as the prime minister prepares to announce a government plan to ease the lockdown measures.

Sturgeon has also lamented the lack of coordination between the authorities of the UK’s four countries, saying that the slogan "stay alert" appeared in The Sunday Telegraph before the leaders of Wales, Scotland, and the Northern Ireland had heard about it. "We should not be reading of each other’s plans in newspapers", said Sturgeon.

Her remark echoes statements by authorities in Wales and Northern Ireland, who expressed doubt over the Downing Street’s new strategy. Vaughan Gething, Wales' health minister, stressed that the message for Wales has not changed. "Stay at home and if you do go out observe the social distancing rules". In her turn, Northern Ireland’s First Minister Arlene Foster said that it was right to stick with the original slogan. "We will say we are not deviating from the message at this time", she told the BBC.

The development comes as the United Kingdom became the first country in Europe to surpass the 30,000 death toll mark. Britain now has the second highest number of fatalities after the United States, where the death toll stands at 80,323, according the website Worldometer, which provides real time statistics.