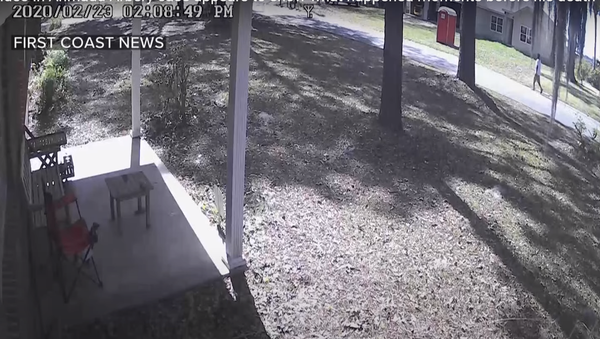 Ahmaud Arbery was shot dead in February in the state of Georgia by two men, a father and son, who are now arrested and charged with his murder. The case received public attention after a video of the shooting emerged on social media, quickly resulting in a massive call for justice.

New video footage has emerged in the case of the murder of Ahmaud Arbery, who was shot and killed in February. Security video in the area revealed the killing which was later posted to social media. Investigators are using the video recordings to piece together a timeline of the crime.

The video shows a young man looking into a house under construction who looks similar to Arbery. It is not clear what exactly what he did on the construction cite. He departs in several minutes, jogging up the street and is then followed by two police cars heading in the same direction.

The video is from a security camera installed on a building about a block away from where the shooting took place.

A review of the video has bolstered the charges against the two men who shot Arbery, as the footage does not reveal any wrongdoing, lawyers for Arbery's family said.

"Ahmaud Arbery did not take part in any felony, had no illegal substances in his system, was not armed yet was shot three times with a shotgun at close range", the lawyers detailed.

Amid public outcry following the release of the initial video of the shooting, Georgia's Attorney General Chris Carr tweeted that he would investigate how the murder probe was handled at the local level, noting that people "deserve answers"

I will be looking into how the #AhmaudArbery case was handled from the outset.

The family, the community and the state of Geoegia deserve answers. We need to know exactly what happened, and we will be working to find those answers.

​Although the shooting took place 23 February, the death received wide public attention after video of the murder appeared in social media, immediately going viral and causing waves of rage as some believe the killings were racially motivated. The video showed two men, Gregory McMichael, 64, and his son, Travis McMichael, 34, shooting Arbery while he jogged past their car. During the shooting, three shots are heard, as Arbery tries to walk away and then collapses nearby. After the video emerged online, the gunmen were arrested and charged with murder.