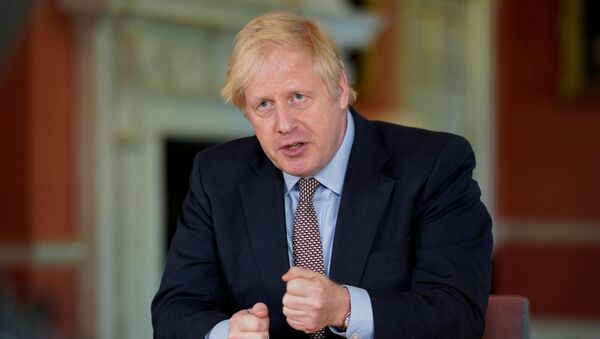 Tim Korso
All materials
Despite taking measures to prevent the spread of the coronavirus infection, the UK has still registered 219,183 confirmed cases of COVID-19 and 31,855 deaths from the novel disease.

UK Prime Minister Boris Johnson has in his address to the country praised the effectiveness of the lockdown measures imposed to limit the spread of the coronavirus, adding that otherwise the worst-case scenario suggested up to 500,000 lives would have been lost due to the pandemic. He admitted that the lockdown measures have taken a major toll on the British "way of life", but urged for a cautious lifting of the quarantine limitations in order to avoid a second spike in cases.

The prime minister explained that the government has a plan to lift the lockdown measures, but stressed that it's conditional. According to Johnson, there will be five COVID-19 alert levels that will mostly depend on the speed at which the virus spreads at any given moment. The PM indicated that currently the UK is at level four and is moving towards level three, but is definitely not ready for a total lifting of the quarantine. 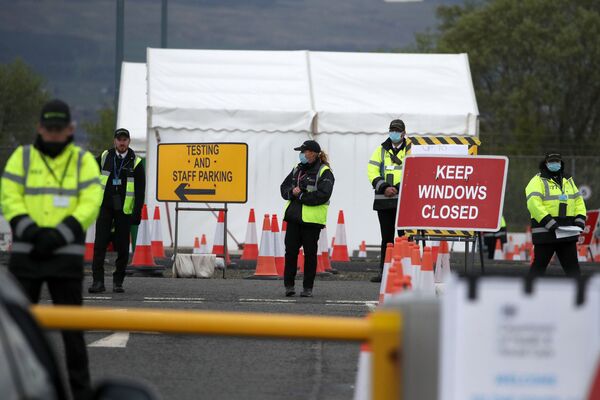 Staff direct traffic as key workers arrive for a test for the novel coronavirus Covid-19 at a drive-in testing centre at Glasgow Airport on April 29, 2020, as the UK continues in lockdown to help curb the spread of the coronavirus.
© AFP 2022 / ANDREW MILLIGAN

In order to determine exactly when the UK is ready to switch to a lower alert level and thus remove additional lockdown measures, the country will be establishing a special alert system in cooperation with a new biosecurity centre. For the plan to work, the UK needs to develop a "world-beating" system for testing people for COVID-19 and tracing those who have tested positive, the PM stressed.

The prime minister also announced the first changes to the lives of citizens in terms of the lockdown, stressing a shift from the "stay at home" paradigm to "stay alert". He revealed that now, all employees who are unable to do their job from home are "encouraged" to go back to work.

At the same time, Johnson called on all Britons to avoid public transport if possible, urging people to use bicycles, cars, or simply walk to work. The prime minister stressed that in order to enforce social distancing rules, then public transport will only be capable of working at 90% of its usual capacity. 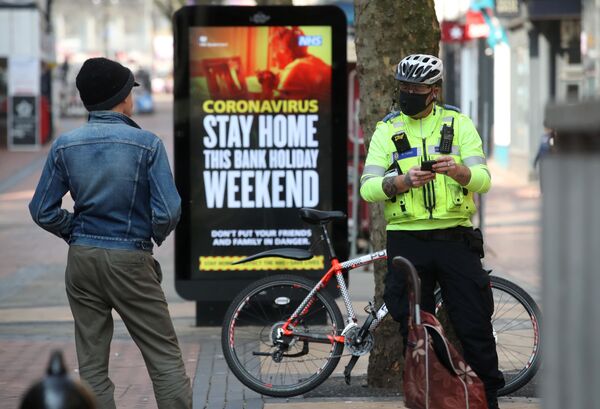 The PM also revealed that from now on, British citizens will be allowed to have unlimited outdoor exercise instead of just once per day, will be able to visit parks, travel to other parts of the country, and play sports – although only with members of their own household. Britons, however, are still obligated to follow the social distancing rules set by local authorities, with fines for violating them set to be increased substantially up to 100 pounds, according to the plan.

Apart from explaining the immediate measures to lift the quarantine limitations, Johnson also gave a glimpse at future steps that will be taken if the situation with the pandemic in the country improves in May.

Namely, the PM suggested that some shops, as well as schools for primary pupils, will be reopened at the earliest by 1 June. He also expressed hope that secondary pupils, who are facing exams in the coming year, will also get some time to prepare for them before the holidays. The prime minister also suggested that some businesses in the hospitality sector and other public places will be able to reopen by 1 July if they are "safe" and enforcing social distancing rules.

Despite the fact that the details of Boris Johnson's plan are yet to be revealed, with the PM promising to lay them out for Parliament on 11 May, it has already faced an initial negative response. UK Labour Leader Keir Starmer opined that the plan lacks clarity in certain aspects, as well as "consensus", and raises more questions than it gives answers.

"The prime minister appears to be effectively telling millions of people to go back to work without a clear plan for safety or clear guidance as to how to get there without using public transport. What the country wanted tonight was clarity and consensus, but we haven’t got either of those", Starmer said.

Scottish First Minister Nicola Sturgeon also reacted to the announcement of Boris Johnson's plan, revealing that Scotland would only be using a fraction of the suggested measures to lift the lockdown. She said that people will be allowed to have more outdoor exercise, but reopening businesses is not on Scotland's immediate agenda yet.