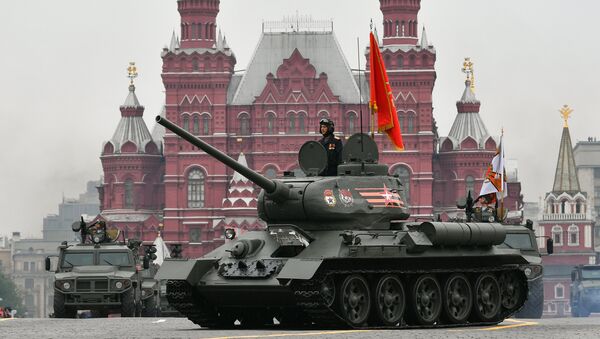 Subscribe
This year, the traditional course of the holiday was changed by the coronavirus pandemic, but the country is still ready to hold celebrations to commemorate Victory Day with few delays.

Russia is celebrating the 75th anniversary of victory in the Great Patriotic War, commemorating the liberation of Europe from the Nazis and the triumph of the country and its allies.

Following the president's address to the nation, the Russian Air Force plans to hold a major parade in Moscow with 75 aircraft participating in the event. Later in the day, air shows and other activities are also planned in St. Petersburg and many other cities and regions of the country and will be broadcast for people who are self-isolating in their homes.

"I join [the celebration] of the victorious end of the Great Patriotic War against Nazi Germany, greeting our brother [President] Vladimir Putin and the Russian people", Venezuelan President Nicolas Maduro tweeted.

He added that this victory is proof of the determination of people to live in a world free from all forms of "imperial domination".

"As a result of the Embassy's work, we have managed to confirm information about Soviet servicemen, buried in a cemetery in Hanko. Thanks to cooperation with Finnish partners, we have discovered archival records showing that remains of at least 528 Soviet servicemen are buried here. Newly discovered names of 357 servicemen are immortalized on granite slabs, installed on the memorial's grounds", the Russian Embassy in Finland said.

Ambassador Kuznetsov described the victory as a collective feat achieved by the entire Soviet nation as all Soviet peoples had fought and died side by side.

Earlier in the day, Ambassador Pavel Kuznetsov, along with his Belarusian and Kazakh counterparts, Aleksei Samosuev and Zhanna Sartbayeva, laid flowers and wreaths at a memorial at a mass grave on the Hanko peninsula that used to be a site of intense fighting in June-December of 1941.

"From the bottom of my heart I congratulate you on the 75th anniversary of the Victory. This anniversary represents the end of World War II, which caused great grief to the entire humanity and claimed millions of lives of Soviet citizens. This anniversary reminds us how precious world peace is", Turkish President Recep Tayyip Erdogan said in his message.

He went on to note the importance of the two countries’ joint efforts to establish peace and ensure stability in the region and expressed solidarity with the Russian government and people in their fight against the coronavirus.