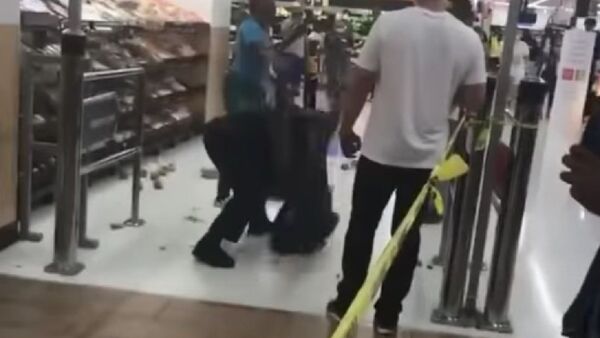 Alabama’s Birmingham Police Department (BPD) recently initiated an internal review of one of its officers after cellphone footage emerged online, showing an off-duty cop body-slamming a Walmart customer who became upset after being instructed to wear a face mask inside the store.

Preliminary findings by the department have determined that the unidentified woman was initially asked by a store employee to wear a face covering while inside the store, and that the shopper’s negative response prompted the off-duty officer, who was working as store security, to become involved.

Video of the altercation begins after the initial confrontation between the shopper and store employee and shows the law enforcement official in the process of trying to place the customer in handcuffs. It’s at the 10-second timestamp that the officer is seen picking up the woman and tossing her onto the floor face-first.

Although the brief video ends with the officer kneeling over the arrestee, the department indicated in a Thursday video release that the woman had not received injuries as a result of the officer’s takedown measure. BPD spokesperson Sgt. Rod Mauldin stated that the shopper refused medical attention.

“The reason for the officer’s contact was disorderly conduct and not just a mere violation of a face covering ordinance,” Mauldin said in the video statement. “We understand we are operating in trying times. The Birmingham Police Department has maintained a consistent, community-oriented, educational approach to the surrounding circumstances of COVID-19.”

Mauldin went on to explain that the body-slamming technique was used by the off-duty cop to regain control of the situation, which had escalated “due to other threat factors.” Though Mauldin did not specify which factors were contributing to the incident, the cellphone video does show a second shopper standing nearby appearing to exchange words with the arrestee.

Citing secondary footage, AL.com reported that the arrestee was reportedly seen appearing to “spit at another woman while she was in handcuffs” after the body slam.

After being detained, the woman was ultimately charged with disorderly conduct, resisting arrest, third-degree criminal trespassing, possession of marijuana and unlawful possession of a controlled substance.

An investigation into the officer’s use of force is ongoing, according to Mauldin, who noted the process is department policy in such instances.