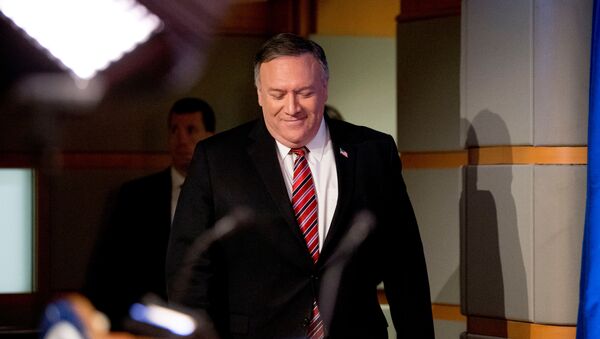 Pompeo will travel to Jerusalem on 12-13 May to discuss with the leaders of the emerging Israeli government - Prime Minister Benjamin Netanyahu and the Speaker of Knesset Benny Gantz - a variety of bilateral and global issues, including joint efforts to defeat COVID-19, Israel’s plans to annex parts of the occupied West Bank and what US officials refer to as Iran’s “malign activities” across the region.

“We have been able to develop a range of risk-mitigation steps that we feel create a safe environment for both, the Secretary and the traveling party, in close coordination with the Embassy in Jerusalem as well as our Israeli counterparts,” Walters said during a briefing on Friday.

Walters explained that the visit is a “tightly controlled movement in a highly screened environment” that US officials feel is very safe.

Walters also said that every person who comes in contact with Pompeo will be screened for symptoms in advance and no unknown individuals allowed near the delegation. In addition, the Secretary’s team will undergo screening and be required to use masks aboard the airplane.

“Secretary’s physician will be on hand at all times. Interactions will be obviously brief and professional and then the Secretary will be back on a plane to come back to the United States,” Walters said.

US diplomats lauded Israeli efforts to contain the COVID-19 outbreak that proved so effective that the country has wound down most of the novel coronavirus-induced restrictive measures.