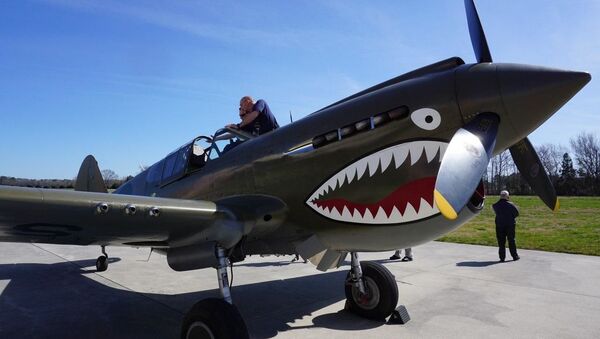 Virginia, (Sputnik) - A World War II prop fighter airplane with a colourful "Flying Tigers" paint scheme, an insignia of US volunteer pilots who fought the Japanese in the Pacific, taxies at a Virginia airfield. During its brief first life, the P-40 Kittyhawk had red stars on its wings while defending the Soviet Arctic and was shot down in 1942.

More than half a century later, the airplane's wreckage was found in a swampy tundra and sold to the United States, where it eventually made its way to millionaire aviation enthusiast Jerry Yagen. Meticulous restoration returned the Kittyhawk to the skies, kick-started Yagen's historic plane collection, and his celebrated Military Aviation Museum.

"This was the very first plane in my collection... The airplane was shot down, we assume by a German airplane, and it crashed in the Murmansk area. We restored this airplane to a flyable condition", Yagen said. "Oh yes, it was hard. Where do you get parts for it? You cannot call a factory and say, ‘Send me a new wing, send me a new engine.’ We had to take parts from three or four engines, and we overhauled the parts and then we made one engine out of them. We had to find propeller blades and such. And they were all cleaned up and rebuilt. So everything in the plane was made almost like new. It's a very valuable airplane". 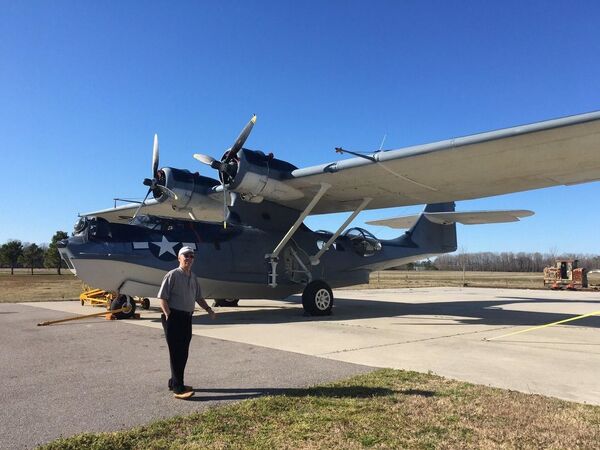 Among dozens of aircraft exhibited in the museum's hangars or awaiting restoration in warehouses and workshops, are Soviet combat airplanes with a similar background.

A Battle Longer Than Life

A P-39 Airacobra fighter, one of the thousands the United States supplied to the Soviet Union under the lend-lease military assistance programme, has red stars and bullet holes across the wings - a reminder of its last battle, which apparently continued even after the pilot was killed.

"With this aircraft when we found it, we pulled the guns out of it - the pilot was still on the trigger", one of Yagen’s assistants explained. "After he was shot, probably dead, he stayed on the trigger because there were still rounds chambered in the barrel. When the plane crashed, it bent the barrels of the 50-calibre machine guns".

The wreckage was retrieved from the north of Russia and is kept in the museum's warehouses. Off-limits to casual visitors, spacious hangars are crammed to the ceiling with aircraft engines, fuselages, propeller blades, and weaponry. One can even occasionally stumble upon a race car there, an anti-aircraft gun, or a double-decker British bus - temptations the collector could not resist.

It takes being on top of a ladder to make out, through piles of antique metal, a section of a Lavochkin-5, one of the best Soviet wartime fighters.

"lt's one of the original Lavochkin-5s. I am not sure where we pulled the wreck out of, but it is a real wreck. It has wartime history", Tom Kurtz III, general manager of the Fighter Factory, the restoration branch of the Military Aviation Museum, said. 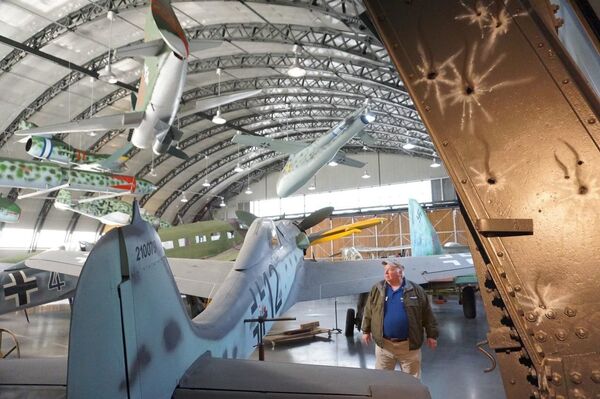 "The most difficult part of the whole thing is exactly what we have got - the cockpit, all the controls that are in the cockpit, all the way to the basic control systems for the wings, landing gear, all of that", Kurtz said. "All that is the hardest stuff to get and we have it".

Nevertheless, Kurtz said he expects the restoration to take around ten years and cost millions of dollars.

"It depends on the state of the airplane, also on the rarity of it. There are some airplanes, for instance, American trainers, for which parts are fairly readily available... It's much different if you have to fabricate the part completely from scratch", Museum Director Keegan Chetwyn joined the conversation. "These sorts of projects tend to range into the millions, even light restoration projects. They can range up to a million dollars. But the reconstruction of whole airplanes, you are looking at a three, four, five million dollar projects to really bring these airplanes back to life".

Another relic, already restored but disassembled to save space, is an early Soviet I-16 monoplane fighter with an original engine and white camouflage paint scheme.

"I had it restored in Russia, but not to fly. It was too valuable. It had too many original parts on it", Yagen said.

However, Yagen said he is ready to trade that aircraft. The museum has not only acquired another airworthy I-16, but a lineup of Polikarpov fighters, including I-15bis and I-153 biplanes, flown by the Soviets during interwar conflicts in Spain, China, Mongolia, and Finland.

A colour photograph pinned to a Fighter Factory message board shows a Soviet pilot, found in the north of Russia with his British-made Hurricane fighter. He crashed into a marsh, which for years kept the remains from decaying.

"But look at his hands. That was 60-70 years after the war and you could still see his fingernails", Yagen said. "It looked like it happened yesterday". 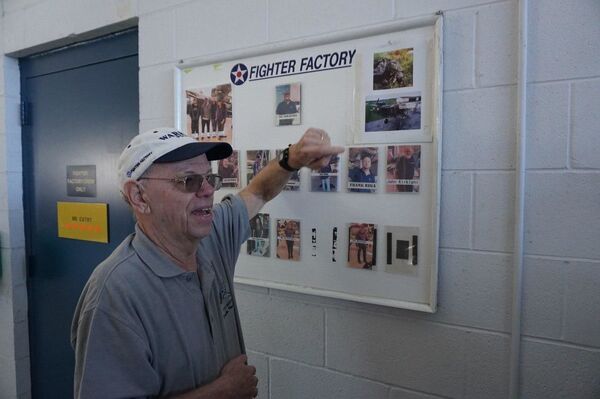 Jerry Yagen shows photos of a Soviet pilot and his plane found in the north of Russia (mentioned in a separate chapter)
© Photo : Military Aviation Museum in Virginia

Yagen said he recalled a conversation with his representative in Russia, who phoned to report the find and warn that the authorities if notified, would take the airplane, not just the pilot's body.

"I said, 'Let me think about it for a day, I will call you back tomorrow.' I called Oleg back the next day and I said, 'Oleg, I will tell you the truth. We have to tell the family, we have to tell the government about the airplane. Yes, they will take the airplane from us, but...'", Yagen said.

Russian officials took the body but were in no hurry to return for the Hurricane, so Yagen transported the wreckage to Virginia Beach. The pilot was buried with military honours. He had no relatives left, everyone had died in the war.

"Yes, they found out where his family was. But everybody in the family was killed during the war. It was a very small village", Yagen said. "No, I don't have much history on it. We were mainly just trying to save the airplane".

Yagen pointed out that he has wound down his business in Russia, which was once a bonanza for Western aircraft collectors, as stricter legislation has left no loopholes for the export of aviation relics.

"I have some airplanes that I found many years ago in Russia and now I cannot get those airplanes out of Russia. The government will not allow them to leave", he said. "I understand why Russia says no airplanes can leave Russia. I am not angry with that".

Yagen noted that he hunts down aviation relics from all over the world. A German Focke-Wulf 190 arrived at Virginia Beach from a Norwegian fjord.

A British Spitfire came from Israel, where it was rusting on a kibbutz playground. In the United Kingdom, Yagen bought a World War II control tower, dismantled it brick by brick and reassembled it at the edge of the museum's airfield - including the restroom, used, as he assures people, by no other than Dwight Eisenhower, the commander of the allied forces in Europe and future US president. 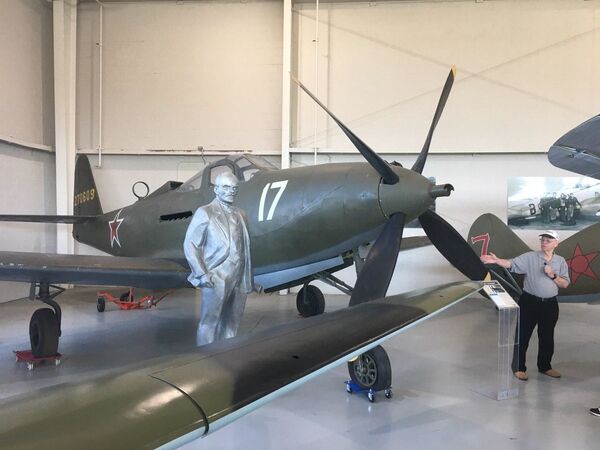 An aircraft hangar from Germany is pierced with bullets from Soviet soldiers who were advancing on Berlin in 1945 and bears a 1944 autograph of a Polish slave labourer imprisoned by the Nazis. The historic building houses Yagen's Luftwaffe aircraft, ranging from a tiny liaison Fi-156 Storch to a Ju-52, a massive three-engine transport plane.

"It gets more difficult every year finding airplanes. Ten years after World War II you saw them everywhere. But today, it has been 75 years, all the airplanes have been found, almost all of them", Yagen said. "There are still some, I have a list of airplanes that are still out there. But if I already have the airplane, like it's a Spitfire that I already have, I don't want another one. One is enough".

Yagen explained that his passion for aviation is rooted in his childhood when Jerry would build flying aircraft models. Then there was pilot school, a girl who waved to a cadet on his first solo flight and later became his wife, a risky journey across the Atlantic aboard a light plane, echoing Charles Lindbergh's endeavour, and a beloved P-51 Mustang fighter, which Yagen - until very recently - would occasionally fly himself together with his wife.

His business, which is not unrelated to aviation, allows him to pay for an expensive hobby. Yagen started by helping Vietnam War veterans find a job, and then established a network of colleges to train aviation technicians, the largest in the world, he said. 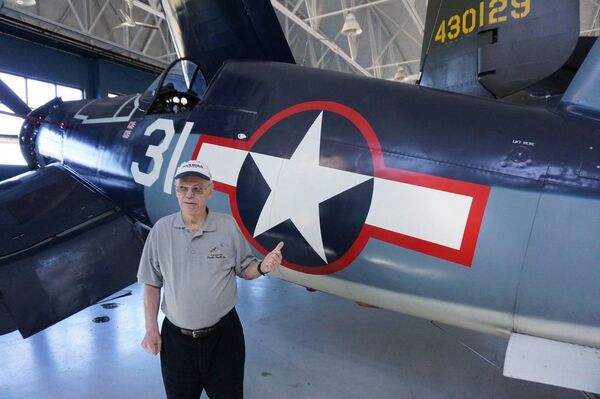 Yagen was once on the verge of bankruptcy and, until the situation improved, had to sell historic planes to keep paying salaries and purchasing training gear.

"My heart was broken. Like selling your children", he said. "I sold some very valuable pieces, like a B-17 bomber. That's very rare, that's one of the rarest airplanes in the United States".

About 85,000 visitors to Yagen's museum annually are chaperoned around exhibition halls and workshops by volunteer guides in love with aviation. Two of them, retired school principal Skip Johnson and former engineer Hank Jones, wear badges certifying their "Senior Docent" museum rank and an impressive record of several thousand hours of volunteering.

They both admit it is a major professional challenge to introduce the American public to "the enormity and the bigness" of World War II in Russia.

"That blows their mind when we explain, 'That's like if somebody invaded the United States and conquered all the way up to the Mississippi River and the front line went from Canada to the Gulf of Mexico.’ That gives you a glimpse of the scope of fighting in the Soviet Union at that time", Johnson said. "Eight out of ten German soldiers died fighting in Russia". 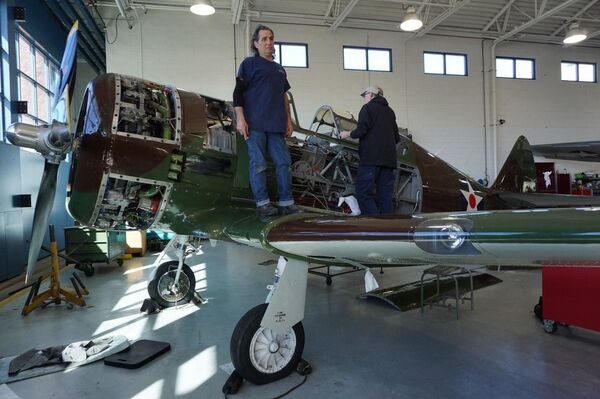 Johnson and Jones said they have done enough research on aviation history to openly challenge stereotypical views of Airacobras' use with the Soviet Air Force, to dwell on the advantages of the "Kuban Staircase" combat formation, and to admire Soviet women pilots - the "night witches" of bomber regiments or Lydia Litvyak, also known as "the white lily of Stalingrad".

The P-40 has a shark mouth painted around its intake, a cartoonish winged tiger on its side, and white-blue suns on the wings, the latter are identification markings of the Kuomintang China Air Force that hired American pilots.

But deep inside the fighter, one finds the manufacturer's serial number - the key to its true story. Archival studies, as related by Senior Docent Skip Johnson, and Russian-language internet resources provide the information to trace the Kittyhawk's biography - from the conveyor belt of the US company Curtiss through the United Kingdom to the Soviet Union, where it entered into service with the 19th Guards Fighter Aviation Regiment in April-May 1942.

The unit's main mission at the time was to defend Murmansk, an Arctic port, and the destination of many lend-lease convoys. Superior P-39s would engage German escort fighters, allowing P-40s to attack bombers. 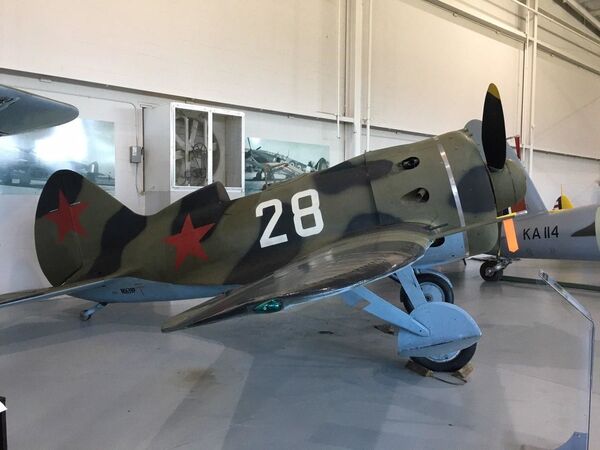 The plane was probably shot down on 1 June 1942, and was piloted by Captain Ivan Pavlov. A deputy squadron commander, a Finnish campaign veteran, decorated with the order of the Red Banner, he had a hundred combat sorties. He personally shot down a Ju-87 German dive bomber and two more Bf-109 fighters as part of the group. Wartime documents list Captain Ivan Ivanovich Pavlov, born in 1915, as missing in action.

The Kittyhawk has another secret, a small extra seat hidden in the cockpit.

"One time we took up a pilot from the original Flying Tigers and he was in a low-jump seat in the back, behind the front seat", Yagen said. "He has now passed away. Many years old".