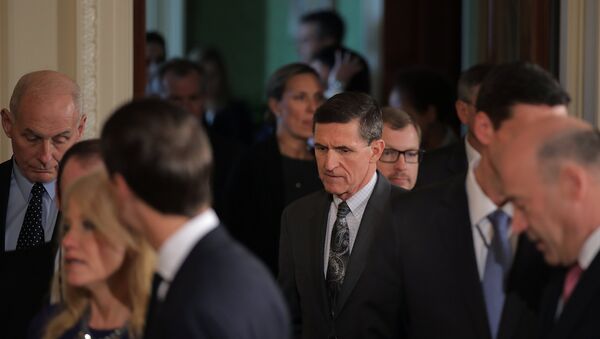 The recently unsealed documents have marked a new turn in former National Security Adviser to President Trump Michael Flynn's litigation, two and half years after he pleaded guilty to lying to FBI agents. American political observers have explained how the new disclosure may backfire on US intelligence.

The new evidence indicates that the retired United States Army lieutenant general apparently fell victim to a perjury trap set by the FBI, says Flynn's defence, raising the question as to why Justice Department prosecutors refused to produce the aforementioned Brady material for so long.

On 4 May, Republican lawmakers Jim Jordan, R-Oh, and Mike Johnson, R-La, wrote a letter to FBI Director Christopher Wray criticising the "Obama-Biden era FBI" for multiple instances of "political bias and serious misconduct", requesting that he "immediately review" the actions of the FBI in targeting General Michael Flynn and asking why the bombshell evidence provided by the DOJ as part of AG William Barr's a re-examination of Flynn’s case had not been divulged by Wray earlier.

The discovered files include handwritten notes attributed to then-Counterintelligence Director at the FBI Bill Priestap which were taken in January 2017, after a meeting with former FBI Director James Comey and Deputy Director Andrew McCabe, according to Fox News.

"What's our goal? Truth/Admission or to get him to lie, so we can prosecute him or get him fired?" Priestap wrote.

"If we get him to admit to breaking the Logan Act give facts to DOJ + have them decide… If we’re seen as playing games, W[hite] H[ouse] will be furious. Protect our institution by not playing games", the notes further read.

Even before the documents were made public, American legal experts repeatedly expressed concerns about the way Michael Flynn was interviewed by FBI agents Peter Strzok and Joe Pientka as they neither informed the White House counsel about their plans, thus leaving the general without a lawyer on hand during the interview, nor played the recordings of the phone talk in question for Flynn.

"My take on the FBI’s methods used here is that certain highly-placed people in the FBI appeared to have grossly violated those methods, and that their conduct represents a serious threat to democracy and the rule of law", says Ron Coleman, a New York attorney and political commentator.

"The FBI’s misconduct is astounding, but unfortunately not unprecedented. It is a disgrace and shocking", agrees Paul Gosar, a Republican congressman from Arizona.

·         "First, the FBI had a duty, called the Brady Doctrine, to turn over all exculpatory evidence. The recently released memos were not turned over to the defence and are obviously exculpatory in that they demonstrate prosecutorial abuse and a set-up for a perjury trap".

·         "Second, it is disturbing to see how the FBI in fact is playing partisan 'games' but wanted to conceal that too. The memo says 'If we’re seen as playing games, WH will be furious'. How a professional law enforcement agency is even debating how to conceal its 'game playing' so the White House would not be 'furious' is an amazing concession of incompetence and bias".

·         "Finally, the discussion about what its goals are, including 'Truth/admission or to get him to lie, so we can prosecute him or get him fired?' is fundamentally dishonest and abusive. The FBI has one job: uncover the truth and pursue justice".

These memos alone warrant a dismissal of Flynn's case, according to Gosar.

"Setting people up, getting people to lie, and engaging in treasonous activities in support of a soft coup are actionable crimes that need to be fully prosecuted for all involved", the congressman stresses. "It is a shame that AG Barr has not pursued this aggressively. It is the most egregious inside job to undo an election in American history".

It was clear that something is rotten in Michael Flynn's case, so now information is coming to prove what everyone knew, echoes Jim Jatras, ex-US diplomat and foreign policy adviser to the Senate GOP leadership.

"The FBI methods were totally unjustified", he stresses. "Look, I've had many talks with FBI agents who were assigned to a foreign intelligence agent I might have met with. They came to me for information about their target – I was not the target. So they ask what I know, what we talked about, whether I was subject to a recruitment pitch, etc. That's the kind of conversation Flynn believed he was having. Instead, he was the target of a 'perjury trap'".

While he deems it possible that the heads of some low-ranking officials will roll, Jatras does not expect that "the big fish" – former FBI Director James Comey, ex-DNI Jim Clapper, ex-CIA Director John Brennan, and Barack Obama – will ever be called to account.

Furthermore, this political tactic to cripple Trump has worked and it cannot be undone, the former diplomat underscores: "It was a political vendetta against Trump to pick off one of his top people, expose him to total Deep State control. It worked. The bad guys won. End of story", Jatras concludes.