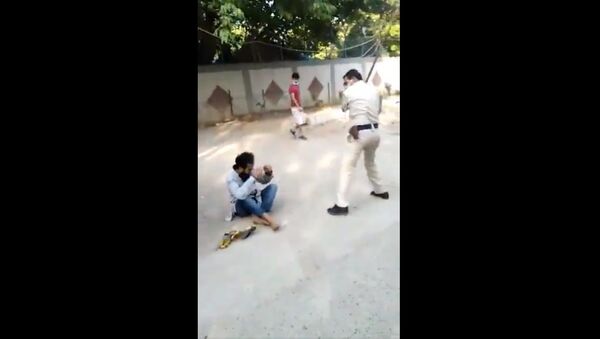 New Delhi (Sputnik): India is under the third phase of its nationwide lockdown imposed by Indian Prime Minister Narendra Modi to combat COVID-19. The government has asked people to stay indoors and only step out for essential things. Social distancing is being strictly enforced at every place or shop.

A man who was allegedly hugging people on the road without their consent in the Indian capital city received a thrashing by a policeman and a few other locals who joined to beat him with sticks.

The video on Twitter shows the policeman chasing and beating the accused man with a baton until he falls to the ground. A few other local people, who had their faces covered also beat the man while the crowd chasing him can be heard saying "Mar Mar" (Beat him up) in the background.

Dramatic visuals have been recovered from South West #Delhi's Sagarpur area where a man was forcefully hugging others. He was then brutally thrashed by cops and locals. The video is said to be of yesterday, however cops said they are looking into it. @DelhiPolice #COVID19 pic.twitter.com/yCrUeynv2T

The Delhi Police have stated that they are looking into the matter and efforts are on to identify the policeman and other people involved. Meanwhile, no police complaint has been lodged on the matter so far.