© AP Photo / Patrick Semansky
Subscribe
International
India
Africa
China is able to compete with the United States in the exploitation of moon resources. Successful testing of the Chang Zheng-5B heavy-lift rocket is an important step in this direction, Sergei Filipenkov, a Russian aviation and cosmonautics expert, said, commenting on the US Artemis Accords lunar project.

China's first successful launch of the new Chang Zheng-5B heavy-lift launch vehicle on 6 May took place at the same time as the United States announced the drafting of an international agreement on mineral resource extraction on the moon. According to Reuters, the US' potential partners for the Artemis Accords project are a number of EU states, Canada, Japan, and the UAE.

According to competent sources, at the initial stage, Russia, which is NASA's main partner in the ISS, allegedly won't be involved in negotiating the project. China is also not mentioned among the possible partners for a future international agreement on moon mineral resource extraction.

As NASA Watch explained, today, space is increasingly seen as a new area for military activity. The new project should symbolise NASA's growing role as a tool of American diplomacy and is expected to cause controversy between the United States and its space rivals, such as China, NASA Watch said. Crew members Jessica Meir of the U.S., Oleg Skripochka of Russia and Hazzaa Ali Almansoori of United Arab Emirates pose for a picture behind a glass wall during a final news conference ahead of their mission to the International Space Station (ISS) in Baikonur, Kazakhstan September 24, 2019
© Sputnik / Sergey Mamontov

Sputnik talked to Sergei Filipenkov, an MAI expert and Aviapanorama editor, to find out why China and Russia aren't mentioned among the partners in the Artemis Accords project. In his opinion, Trump wants to stake out certain sections of the moon to exploit its resources without China and Russia, since he understands that both China and Russia are potentially the US' strongest competitors:

"So far, China's space programme is repeating the Soviet Union's achievements. It's entirely possible that in the next ten years China will take advantage of Soviet developments, and after 2030 Chinese taikonauts will be able to safely land on the moon. They have all the technical capabilities to do that. According to Roscosmos, Russian cosmonauts will also land on the moon after 2030. If China has the financial capabilities, if it invests huge funds in such a programme, the country will be able to easily realise it. There are no other major technical and medical problems for Chinese taikonauts to land on the moon".

The expert stressed that China is able to compete with the United States on the moon after 2030. It will take China about 10 years to master a manned landing on the lunar surface and start mining. China will master its unmanned lunar programme by about 2025.

By this time, China will be able to create lunar testing grounds for natural resource research, as well as outline the astronauts' landing platform on the moon's surface, Sergei Filipenkov said. At the same time, the expert suggested that the Americans are unlikely to land on the moon in 2024-2025, as they are currently planning.

This plan is recorded in NASA's lunar programme, Artemis. This is where the Artemis Accords, a future international project for lunar mineral extraction, comes from. NASA wants to create a "stable presence" on the moon's south pole, as well as allow for the extraction by private companies of lunar rocks and groundwater that can be converted into rocket fuel. 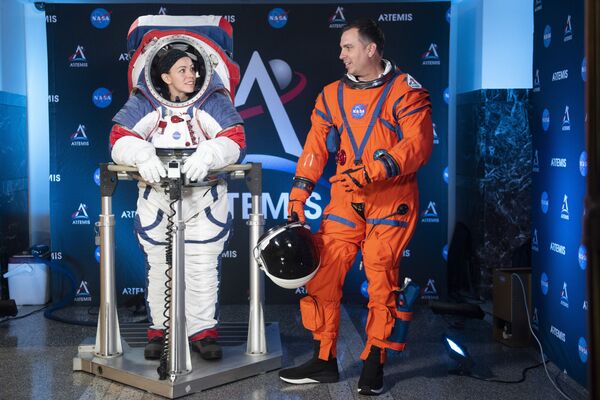 The two NASA spacesuit ​prototypes for lunar exploration, one for launch and re-entry aboard the agency's Orion spacecraft, known as the Orion Crew Survival Suit, is worn by Dustin Gohmert, right, and one for exploring the surface of the Moon's South Pole, known as the Exploration Extravehicular Mobility Unit (xEMU) is worn by Kristine Dans on Tuesday, Oct. 15, 2019, at NASA Headquarters in Washington
© AP Photo / Kevin Wolf

According to the expert, yesterday's successful testing of China's Chang Zheng-5B heavy-lift rocket is a necessary step in the Chinese lunar programme's development:

"Obviously, Chang Zheng-5B is designed for this. It's needed to create a base on the moon and develop infrastructure there for further research. Chang Zheng-5B is a heavy-lift rocket, like the Russian Proton launch vehicle, which was once designed for unmanned moon exploration and a possible flyby of the moon without landing. China may well carry out its lunar programme with Chang Zheng-5B".

The US-proposed Moon Exploration Treaty provides for the creation of so-called "security zones" around future lunar bases. Their size will vary depending on the type of operation being carried out there. These zones will be needed to "prevent damage or interference from rival countries or companies operating in close proximity".

On 7 April, the US president signed a decree on the commercial extraction of resources on the moon and other celestial bodies. The document said that the United States didn’t consider space a "public domain". The Russian Foreign Ministry criticised Donald Trump’s decree, noting that when exploring and using outer space for peaceful purposes, Russia proceeds from the equality of all countries.