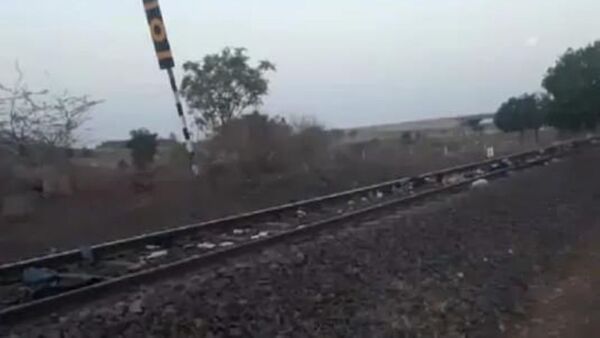 New Delhi (Sputnik): Initial information suggests that the incident involving a freight train occurred due to a group of workers in the southern Indian state of Maharashtra sleeping on railroad tracks.

As many as 17 people were killed and many injured after a train ran over them in the city of Aurangabad in Maharashtra on Friday morning.

According to police, the incident took place at around 6:30 a.m. local time.

An Indian railway (South Central Zone) spokesperson said that the accident happened near Karmad, Aurangabad, when a freight train of empty cars ran over people who had been sleeping on or close to the tracks.

During early hours today after seeing some labourers on track, loco pilot of goods train tried to stop the train but eventually hit them between Badnapur and Karmad stations in Parbhani-Manmad section
Injureds have been taken to Aurangabad Civil Hospital.
Inquiry has been ordered

A local police official stated that the workers were heading to their native state Madhya Pradesh.

"Investigation has revealed that the workers had been walking along the railway track to reach back home and were resting on the tracks," the officer said.

Police are trying to identify the labourers, while the Railway Police Force (RPF) is assisting in the investigation and aftermath.

Extremely anguished by the loss of lives due to the rail accident in Aurangabad, Maharashtra. Have spoken to Railway Minister Shri Piyush Goyal and he is closely monitoring the situation. All possible assistance required is being provided.

After the Indian government announced a complete lockdown in the country on 24 March to curb the spread of COVID-19, millions of migrant workers immediately began the arduous and unexpected journey to their native regions.