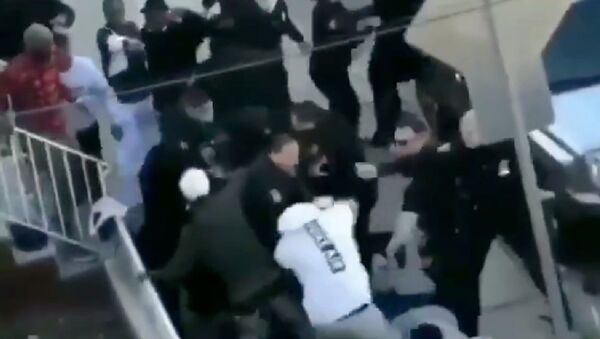 The Tuesday night fracas, which ended with the arrest of six individuals, only saw officers arrive at the scene after an initial 911 call was made at about 5:16 p.m. local time for a 20-person brawl. However, within minutes, dozens of brawlers joined in on the scuffle.

Footage captured by a bystander shows nearly 10 officers surrounded by a group of individuals, some of whom are trying to protect others from being beaten by officers using their department-issued batons. The cellphone footage shows one officer in particular repeatedly swinging his expandable baton at someone who appears to be on the ground.

​Citing Shea, the New Jersey Journal reported that the heavy law enforcement response was reportedly initiated after a male juvenile pulled on an officer’s duty belt while officials were trying to disperse the crowds. It was then that the situation quickly escalated after the unidentified individual and two other women who engaged police resisted arrest.

Shea told reporters that the tense incident later saw local man Dashawn Muhammad pull an officer into a body lock, before another man, identified as Roland Gregory, approached the pair and situated himself “on top of” the officer.

One witness who spoke to the Journal under the condition of anonymity said that the situation “got out of hand” after officers “attacked one man.” The individual stated that the initial brawl only began after a disagreement between two groups in the area turned into a physical altercation.

Besides the use of batons, officers also used pepper spray to disperse crowds and call an end to the events.

Local news station WABC reported that the chaotic scene also saw a struggle break out between an officer and two other people over the cop’s baton.

Of the six residents who were arrested, three were identified as underage and, as such, were not named by the department.

Muhammed and Latia Gregory were both charged with aggravated assault of an officer, disorderly conduct, obstruction, resisting arrest and failure to disperse. Roland Gregory faces an obstruction charge. It’s unclear exactly what Latia did to prompt the charges.

All six refused medical assistance, whereas two officers were treated for pepper spray exposure and two others for cuts, bruises and bloody noses, according to Shea.

Rolando Lavarro, the Jersey City councilman at-large, told the Journal that the cellphone footage of the brawl was “deeply concerning on so many levels, and even more so given our current state of emergency with the COVID-19 pandemic.”

“Coronavirus crisis or not, we all have to redouble our efforts and pledge to address the root causes that allow for such an incident to explode on our streets,” he added. “We all have to acknowledge that generations of neglect and outright racism have led to the conditions that we have today."

Body camera footage of the brawl has since been reviewed by officials within the department’s Internal Affairs Unit, and the investigation into officers’ use of force is ongoing at present.