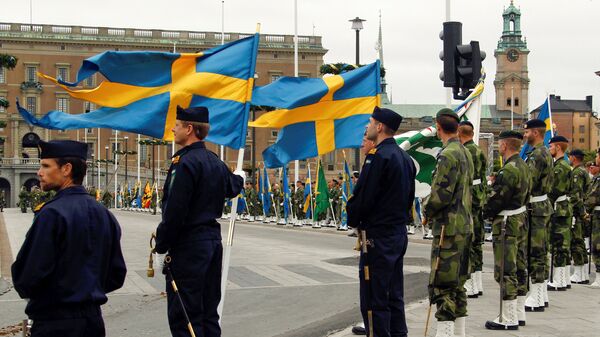 The pan-Islamic Muslim Brotherhood is estimated to have over a million members in 70 countries and has been classified as a terrorist organisation in many countries, including Russia, Egypt, Saudi Arabia, and the United Arab Emirates.

The Muslim Brotherhood's network has in the shadow of the coronavirus crisis forged collaborations with the Swedish Armed Forces' civil organisations, blogger and journalist Johan Westerholm, the author of “Islamism in Sweden”, has claimed.

In his opinion piece on the portal Ledarsidorna, Westerholm cited a recent defence collaboration project featuring, among others, Ibn Rushd, a controversial Swedish educational organisation identified by the country's Civil Contingencies Agency (MSB) as having strong ties with the Muslim Brotherhood.

The project in question is “For your safety”, a free digital training course on crisis preparedness provided by the Defence Trainers, a nationwide voluntary defence organisation that carries out training and recruiting and strengthens emergency preparedness, and Huddinge Municipality in Stockholm County. The course includes three 15-minute films subtitled in Arabic, Kurdish, and Turkish. Apart from Ibn Rushd, other collaborations include the Workers' Educational Association (ABF) and the Swedish Church.

According to Westerholm, who previously served as an intelligence officer, this indicates a “high organisational level” of the Muslim Brotherhood*, its “communicative skills” and a “capacity that has been built up over a long period of time”.

Westerholm cited several reports that concluded Ibn Rushd from its founding onwards rested on the Brotherhood's ideological and theological interpretation of the Quran, and raised concerns about Ibn Rushd's history of inviting hate preachers, its problematic ties, and adverse public image. Also in late 2019, two senior Swedish researchers and associate professors Magnus Ranstorp and Aje Carlbom sounded the alarm over Islamic parallel societies being indirectly funded through taxpayer money. Among others, they highlighted the example of Ibn Rushd, which received an annual SEK 23 million (roughly $2.3 million) grant from the Adult Education Council (FR). According to researchers, it promotes “insitutionalised segregation” by specifically targeting marginalised Muslims from vulnerable neighbourhoods.

“The fact that the Muslim Brotherhood is now taking the opportunity to strengthen its position in civil society together with the Swedish Church is something that is not surprising. This is partly because the government has now been under pressure to remove the requirements for self-financing of aid projects, but also through the cooperation with the Swedish Church”, Westerholm wrote.

According to Westerholm, the corona crisis provides an opportunity for the Muslim Brotherhood to “establish itself in various social functions”.

“It can now be considered to have started establishing itself in the Swedish Armed Forces' civil society organisations and thus in the country's total defence”, Westerholm concluded.

Ibn Rushd is a Swedish study association formed in 2001 with a focus on the Arabic language and religious studies. Since 2008 the union has been receiving state grants. The organisation derives its name from an Andalusian scholar, whose name is often latinised as Averroes.

Founded in Egypt in 1928, the Muslim Brotherhood has fledged into a pan-Islamic organisation with over a million members in 70 countries. It is regarded as a terrorist organisation in many countries, including Russia, Egypt, Saudi Arabia, and the United Arab Emirates. In Sweden, the MB has been active since the late 1970s.

* The Muslim Brotherhood is a terrorist organisation banned in Russia