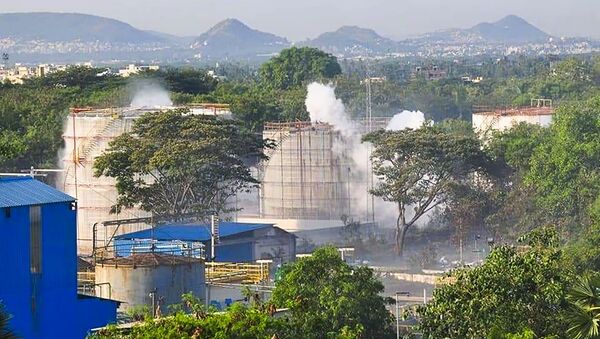 New Delhi (Sputnik): As many as 10 people have died and thousands directly exposed to styrene gas due to their close proximity to a major gas leak at an LG Polymers Pvt Ltd plant in Visakhapatnam.

The leader of the opposition and former state chief of Andhra Pradesh, Chandrababu Naidu, has written to the Ministry of Commerce and Industry seeking action against the South Korean firm LG Polymers, from where a gas leak was reported on Thursday.

​In a letter addressed to Commerce Minister Piyush Goyal, Naidu wrote: “It is also essential to immediately close down the LG Polymers Unit and initiate a thorough inquiry about the gas leakage".

Meanwhile, South Korean Ambassador Shin Bong-kil has said he is "shocked and saddened" by the gas leak.

"This was a highly unfortunate incident and our deepest condolences go out to those affected by this tragic event. We pray for the speedy recovery of those who have been taken ill", he said.

Statement of South Korean Ambassador Shin Bong-Kil on #VizagGasLeak
He expresses his condolences and calls this incident as most unfortunate pic.twitter.com/r2kpul7DAP

​The styrene gas leak, which took place 20 km from Vishakhapatnam in the village of RR Venkatapuram at around 3:30 a.m. IST on Thursday, killed at least 10 people and affected thousands within a 5.5 km radius of the plant, as per the authorities.

​Prime Minister Narendra Modi met the national crisis management committee to take stock of the situation in the morning. Teams from the National Defence Response Force and National Disaster Management Authority (NDMA) are in action and they have already evacuated around 200-250 families in the area.

People with any symptoms such as throat irritation, breathing difficulty, or respiratory distress are being taken to the hospital and being provided with first-aid, officials have said, adding that around 20-25 people are in critical condition.

NDMA officials have said that the flammability of the gas has been reduced but they are still maintaining the check and will keep the plant under observation as long as situation is not completely under control.

The reason for the leak is still a matter of investigation at the plant, which was scheduled to reopen on Thursday after being closed for 40 days due to the nationwide lockdown to curb the spread of COVID-19.

Officials from the All India Institute of Medical Science have stated that the gas doesn’t have a lasting impact but those in close proximity to the plant have suffered severe exposure.

While there is no specific treatment for patients, officials have stated that they are providing supportive treatment related to respiratory problems.