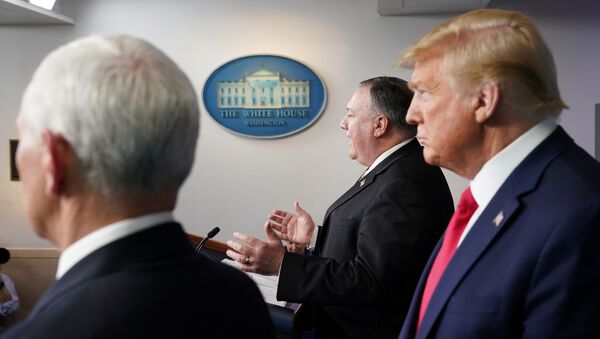 A Yale University epidemiologist is calling into question the legality of US President Donald Trump and his administration’s response to the COVID-19 novel coronavirus, appearing to suggest that federal government officials could be tried under international law.

Hours before Trump took to Twitter to announce the Coronavirus Task Force would “continue on indefinitely,” Gregg Gonsalves, an assistant professor of epidemiology of microbial diseases at the Yale School of Public Health, posed a series of questions to fellow netizens on the social media site regarding Washington’s handling of COVID-19.

How many people will die this summer, before Election Day? What proportion of the deaths will be among African-Americans, Latinos, other people of color? This is getting awfully close to genocide by default. What else do you call mass death by public policy? #COVID19 #coronavirus

As of this article’s publication, the US has tested over 7.5 million individuals for the novel coronavirus, according to Johns Hopkins University. Data provided by the university details that the country has confirmed 1.2 million cases of the novel coronavirus and suffered over 71,400 associated deaths. At least 189,791 recoveries from COVID-19 have been observed in the US.

Gonsalves’ emphasis on the COVID-19 deaths of Black Americans, Latinos and other people of color in the US stems from the fact that there has been a disproportionate amount of novel coronavirus deaths in the Black community.

"Social conditions, structural racism, and other factors elevate risk for COVID-19 diagnoses and deaths in black communities," wrote a team of epidemiologists and clinicians in a new study analyzing novel coronavirus cases and death on a county level, as reported by CNN. The scientists found that counties where Black residents made up more than 13% of the population - about the percentage of the total US population that is Black - suffered 52% of COVID-19 diagnoses and 58% of associated deaths in the country.

"Structural factors including health care access, density of households, unemployment, pervasive discrimination and others drive these disparities, not intrinsic characteristics of black communities or individual-level factors,” noted the researchers.

It’s worth noting that the findings are preliminary, as the study still needs to go through the peer review process.

“So, what does it mean to let thousands die by negligence, omission, failure to act, in a legal sense under international law?” asked Gonsalves in another tweet Wednesday morning.

The conduct of Trump and his administration has been called into question over the past several weeks after reports revealed that the president and federal officials were briefed on the novel coronavirus, and its potential threat to the US, several weeks prior to the declaration of a national emergency on March 13.

Recently, Dr. Rick Bright, the former director of the US Biomedical Advanced Research and Development Authority, said that he alerted Department of Health and Human Services officials in January about the US’ unpreparedness for a possible COVID-19 outbreak. Bright said that he was met with "indifference which then developed into hostility" from the administration and, in his opinion, was the reason for his demotion within the agency.

While Trump is pushing for more Americans to return to their workplaces and restart the US economy - which some believe could lead to a second wave of infections - Gonsalves wondered if there could be some kind of intervention or charges brought against the federal government on an international level.

“And I am being serious here: what is happening in the US is purposeful, considered negligence, omission, failure to act by our leaders. Can they be held responsible under international law?” he asked.