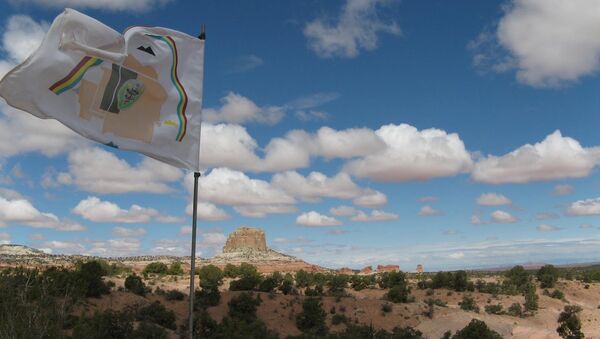 The Navajo Nation American Indian territory that occupies parts of Arizona, Utah and New Mexico has suffered more COVID-19 deaths than 13 US states, which reveals how underfunded Native communities are, Nathalie Hrizi, an educator, a political activist and the editor of Breaking the Chains magazine, told Radio Sputnik’s Loud & Clear Tuesday.

According to Democracy Now!, the Navajo Nation has been hit so hard by the COVID-19 pandemic that it trails only two US states, New York and New Jersey, in coronavirus infections per capita. As of Monday, the rural community had confirmed at least 2,474 cases of the virus and suffered 73 COVID-related deaths.

“The Navajo Nation has gotten a lot of attention … It has more confirmed cases of COVID-19 per capita than almost every US state, behind only New York and New Jersey. Its number of cases surged 367% from March 31 to April 14, and part of the reason for this is twofold: one, the health care facilities in the 27,000 square miles are limited,” Hrizi told host Nicole Roussell.

“Many Navajo citizens also suffer from chronic health issues, which puts you at risk for the coronavirus, and one of the doctors, the chief medical officer of the Navajo area Indian Health Service, made a really good point, you know. Loretta Christensen is her name. She said that you’re telling people ‘Wash your hands multiple times a day for 20 seconds,’ and they don’t have running water. Or you’re saying, ‘Go buy groceries for two to three weeks and shelter in place and don’t come out,’ but people can’t afford groceries for two to three weeks. So, she says, it’s just a setup for frustration and concern,” Hrizi added.

In an April 20 interview with NPR, Christensen explained how the Navajo Nation deals with “profound” health disparities.

“Normally, our people are much more prone to respiratory contagions. We struggle with the flu, pertussis still in this day. And certainly, this COVID has hit us hard because of that vulnerability. We also have multiple people in Navajo Nation with multiple medical problems, such as diabetes, cardiovascular disease, autoimmune disorders, which leaves them extremely susceptible to respiratory illnesses. So it's really come to fruition here, that vulnerability, in the number of cases we've had across the whole entire area,” Christensen said at the time.

Even though the Navajo Nation is larger geographically than West Virginia and has a population of around 300,000 people, it only has access to 20 intensive care unit beds, ABC News reported.

ABC revealed that an estimated 30% of Native people on the Navajo reservation cannot access running water and must use outdoor pumps instead, which makes handwashing during the pandemic even more challenging. Former Navajo Nation Attorney General Ethel Branch, who has established a crowdfunding campaign to distribute food and water to people in Navajo Nation, also revealed to ABC News that there are only 13 grocery stores “available for [her] people.”

On March 27, US President Donald Trump signed an unprecedented $2.2 trillion economic stimulus bill, the Coronavirus Aid, Relief and Economic Security (CARES) Act which authorized the sending of checks to many US families and also gave US banks tools to increase their lending capacities during the pandemic.

This, combined with the Federal Reserve’s pledge to buy up huge numbers of stocks and bonds, totals some $6 trillion in government spending on the crisis. However, Native communities were only allocated $8 billion in tribal relief funds. That money has to be split between 574 tribes, and tribal governments have yet to receive the funds.

“And there’s been a lot about the Navajo Nation having to really step in, because it was promised less money than the National Congress of American Indians said they needed. They said that tribes would need $20 billion in direct relief; they were promised $8 billion from the CARES Act … and they got none of it. And for a variety of reasons - red tape, none of the corporations had to go through that giant red tape - but the Native people are not getting any of that money, and it’s a very, very serious situation,” Hrizi explained.