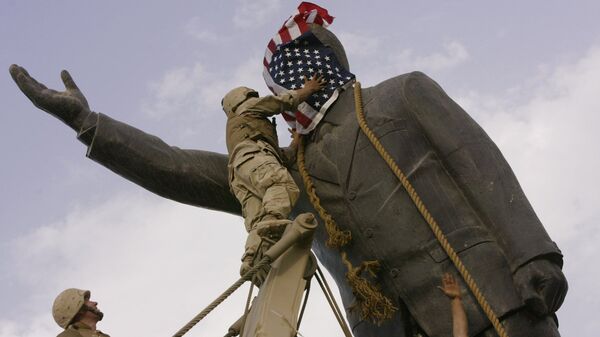 Earlier in the week, reports emerged that the Trump administration is working on a new international pact under the name 'Artemis Accords', which will allegedly provide a framework under international law for companies to own the resources they extract from the moon.

The head of Roscosmos, Dmitry Rogozin, lambasted alleged US plans on "moon mining" and creating "safety zones" on Earth's only natural satellite, comparing the situation with the US presence in Iraq and saying that the "invasion method" remains the same. He described the method as creating a "coalition of volunteers" and "heading to the goal" no matter who may be against it.

​The tweet reads: "The principle of invasion is the same, whether it be the Moon or Iraq: the creation of a “coalition of consonants” is initiated (as an option - a “coalition of willing”), and then, bypassing the UN and even NATO, if anyone doubts there, forward to the goal. However, it is only Iraq or Afghanistan that can come out of this".

The comments follow reports that cite unnamed sources familiar with a plan that US is drafting under the name Artemis Accords that envisages 'safety zones' for future lunar bases to prevent damage or interference from rival countries or companies working in nearby areas. The agreement views Canada, Japan, European countries and the United Arab Emirates as potential partners.

The treaty would reportedly replace one implemented in 1979 suggesting that "celestial bodies and the moon are not subject to national appropriation by claim of sovereignty, by means of use or occupation, or by any other means". The previous Moon Treaty was adopted by the UN although the US opposed joining.

Sources cited by Reuters claim, however, that safety zones do not mean the same thing as sovereignty or occupation, saying that they will require "reaching out in advance" to access the zones and "figure out how to do that safety for everyone".

Russia is not viewed by the US as an early partner in the Artemis Accords, and reportedly considers Moscow as "hostile" due to "threatening" satellite maneuvers toward US spy satellites in Earth orbit, according to Reuters.

Invasions by the US in Iraq and Afghanistan took place in 2003 and 2001, respectfully, with public aims to end the leaderships of Saddam Hussein in Iraq and the Taliban* in Afghanistan.

Iraq's Hussein was accused of connections with Al-Qaeda and possessing weapons of mass destruction, although none were found, in both cases. The US invasion of Iraq took place nonetheless, despite a refutation by the UN Security Council.

The US military campaign in Iraq was one of the reasons for the shaping of Daesh*, as then-US President Barack Obama admitted in 2016, saying that the US "refused to repeat some of the mistakes of the 2003 invasion that have helped to give rise to the organization that became [Daesh] in the first place".

*Daesh, Taliban are the terrorist groups outlawed in Russia and many other countries.