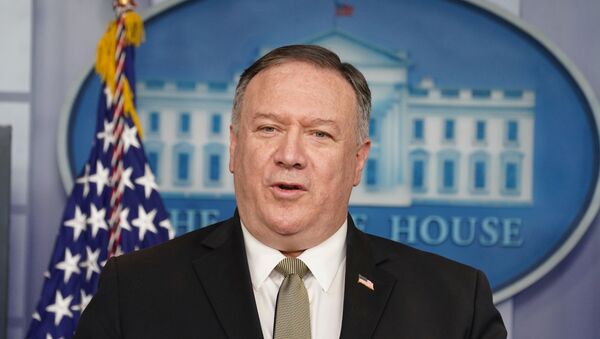 © REUTERS / Kevin Lamarque
Subscribe
The spate of recriminations over the origins of the COVID-19 pandemic escalated last week after the US president accused China of 'concealing' the outbreak and mismanaging its containment, going so far as to claim the pandemic was the result of a leak at the Wuhan Institute of Virology. Chinese officials have forcefully denounced the claims.

US intelligence is "still figuring out precisely" where the coronavirus outbreak began, with Washington "demanding" that China be more "transparent and open" regarding its origins, Secretary of State Mike Pompeo has declared.

"We don't have certainty, and there is significant evidence that this came from the laboratory - those statements can both be true," the secretary said, speaking to reporters in Washington on Wednesday.

"China could have spared the world a descent into global economic malaise. They had a choice but instead - instead China coverd up the outbreak in Wuhan," Pompeo claimed. He added that China was "still refusing to share the information we need to keep people safe, such as viral isolates, clinical specimens and details about the many COVID-19 patients in December 2019, not to mention patient zero."

"As a result of China's choices, countries are starting to understand the risks of doing business with the Chinese Communist Party and taking action to protect their people," Pompeo added, suggesting multiple states have now accused China of "lying" about the outbreak.

"The free nations of the world are starting to understand that China doesn't share those democratic values that we hold dear, or their economic interests," Pompeo said. "There's no true win-win with a communist regime unless you get to the terms that President Trump has talked about, and the reciprocity that President Trump did in the Phase One [trade] deal."

At the same time, Pompeo suggested that US demands toward China were "not about politics" or any attempt to bully or blame Beijing, adding that the US would be "happy" to provide the country with technical assistance on the virus.

The secretary of state's remarks come just hours after Chinese Foreign Ministry spokeswoman Hua Chunying blasted his earlier claims about there being "enormous evidence" that COVID-19 originated at the Wuhan P4 biolab.

"I think this matter should be handed to scientists and medical professionals, and not politicians who lie for their own domestic political ends," Hua said at a Wednesday press briefing. "Mr. Pompeo repeatedly spoke up but he cannot present any evidence? How can he? Because he doesn't have any," she added.

The foreign ministry spokeswoman urged that US to "handle its domestic affairs properly first" instead of trying to shift the focus on China. "The most important thing now is to control the US' domestic pandemic spread and think of ways to save lives," she said.

Hua also warned Washington against making threats to use tariffs against Beijing over China's 'mishandling of the coronavirus crisis', saying a new trade conflict would hurt all parties involved. 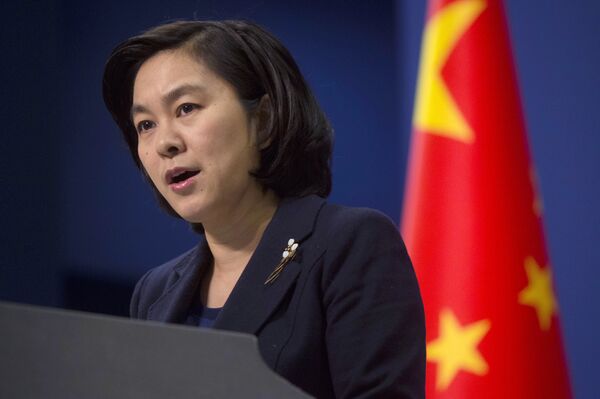 The back-and-forth jabs come following rhetoric by President Trump last week claiming the US had evidence that the novel coronavirus leaked from a Chinese biolab, a claim some of his own intelligence officials have rejected. On Tuesday, Trump promised to release a report on the virus's origin soon.

Earlier, US media reported that the Five Eyes - the intelligence alliance consisting of the US, the UK, Australia Canada and New Zealand deemed it "highly unlikely" that COVID-19 leaked as a result of an incident at the Wuhan Institute of Virology, saying the more likely explanation was that the virus leaked as a result of natural human infection caused by human-to-animal interaction.

At the moment, the consensus among most scientists in both China and the West is that COVID-19 originated in bats and jumped to humans at the Wuhan wet market, a major Chinese market featuring many exotic delicacies enjoyed by some wealthy residents. Last week, the US Office of the Director of National Intelligence said the US intelligence community "concurs with the wide scientific consensus that the COVID-19 virus was not man-made or genetically modified."

000000
Popular comments
Since the rest of the world refuses to buy the crap theory from Washington, the (((Deep State))) is now back paddling. By the way the stooges who were retweeting the BS like slave rats have been robbed off their clothes.

Muhammad-Aryan
6 May 2020, 17:33 GMT4
000000
I'd say it makes scarce difference what the point of origin was, real or confabulated. The fact is: the US failed, again, to protect its citizens, just like so many times before. One might be forgiven for thinking these were not simple failures, but rather intentional. Blaming someone else won't makes an iota of difference to the affected people. They might hang their governors, though.
coronahoax
6 May 2020, 17:37 GMT5
000000
Newsfeed
0
New firstOld first
loader
LIVE
Заголовок открываемого материала
Access to the chat has been blocked for violating the rules . You will be able to participate again through:∞. If you do not agree with the blocking, please use the feedback form
The discussion is closed. You can participate in the discussion within 24 hours after the publication of the article.
To participate in the discussion
log in or register
loader
Chats
Заголовок открываемого материала
Worldwide
InternationalEnglishEnglishMundoEspañolSpanish
Europe
DeutschlandDeutschGermanFranceFrançaisFrenchΕλλάδαΕλληνικάGreekItaliaItalianoItalianČeská republikaČeštinaCzechPolskaPolskiPolishСрбиjаСрпскиSerbianLatvijaLatviešuLatvianLietuvaLietuviųLithuanianMoldovaMoldoveneascăMoldavianБеларусьБеларускiBelarusian
Transcaucasia
ԱրմենիաՀայերենArmenianАҧсныАҧсышәалаAbkhazХуссар ИрыстонИронауОssetianსაქართველოქართულიGeorgianAzərbaycanАzərbaycancaAzerbaijani
Middle East
Sputnik عربيArabicArabicTürkiyeTürkçeTurkishSputnik ایرانPersianPersianSputnik افغانستانDariDari
Central Asia
ҚазақстанҚазақ тіліKazakhКыргызстанКыргызчаKyrgyzOʻzbekistonЎзбекчаUzbekТоҷикистонТоҷикӣTajik
East & Southeast Asia
Việt NamTiếng ViệtVietnamese日本日本語Japanese中国中文Chinese
South America
BrasilPortuguêsPortuguese
NewsfeedBreaking
23:30 GMTPentagon Chief Says US Ready to Support Taiwan in Face of China’s Military Rise
22:47 GMTAmericans' Confidence in US Military Continues Its Decline, Survey Shows
22:22 GMTCNN Fires Chris Cuomo Over His Efforts to Help Brother With Sexual Harassment Claims
22:15 GMTUS Democracy in Trouble? Half of Young Americans Polled Agree
22:01 GMTSuper-Union Leader Explains Donation Cut-Off to Cash-Strapped Labour Party
21:31 GMTFlight From Tel Aviv to Moscow Changed Flight Level Due to NATO Spy Plane - Air Authority
21:18 GMTPolice: Parents of Suspected Michigan School Shooter Had Help Hiding in Detroit Warehouse
19:54 GMTKiev Seizure, Donbas Advance: German Tabloid Sources Fantasize Russian Invasion of Ukraine
19:14 GMTTurkish Authorities Uncover Explosive Device on Police Car Assigned to Erdogan Rally
17:46 GMTBlast Heard Over Iran's Natanz, Where Nuclear Facility Located
17:32 GMTSouth African Province at Centre of Omicron COVID Variant Sees More Children in Hospital
16:54 GMTPolish Prime Minister Orders Cybesecurity Alert Ahead of UN Forum
16:52 GMTGreek Prime Minister Assures Vatican That Condition of Migrants in Greece Improved
16:21 GMTUS Warns of ‘Terrible Consequences’ of Possible Chinese Invasion of Taiwan
16:14 GMT‘Killer Robots’ Threat Persists as US Unwilling to Discuss Ban on Lethal Autonomous Weapons Systems
16:00 GMTLionel Messi Reveals He 'Never' Wanted to Become Best Football Player
15:39 GMTPutin, Biden Will Hold a Video Call on Tuesday Evening
15:36 GMTGiant Christmas Tree Set Up Near Church of the Nativity in Bethlehem
14:52 GMTParty Like It's 1939: German Chancellor's Send-Off Compared to Nazi Rally
14:48 GMTParents of Michigan School Shooter Suspect Plead Not Guilty to Involuntary Manslaughter Charges