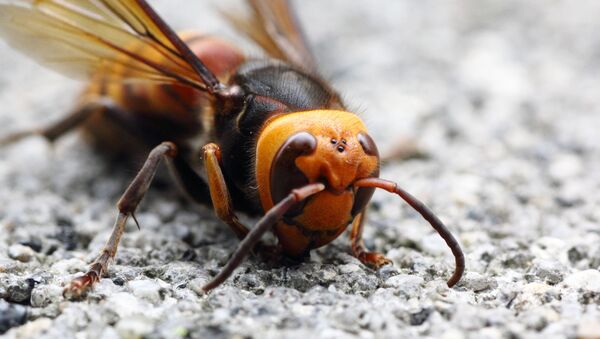 As if things were not bad enough with the ongoing coronavirus pandemic, the first reports of sightings of Asian giant hornets in the US state of Washington have now emerged online, prompting fears of an insect plague that could not only wipe out bee populations, but possibly kill thousands of humans as well.

American citizens should not be scared of “Murder Hornets” – also known as Asian giant hornets that can reach up to 5.5 cm in length – as they are “unlikely” to spread across the United States and even less likely to lead to mass deaths, prominent wildlife YouTuber Coyote Peterson told TMZ.

The Animal Planet host, who is known for occasionally experiencing animal and insect stings while capturing the creatures on camera, said that the sting from the “murder” insect was not even the most horrible one a person can experience, with the so-called “Executioner Wasp” topping them all.

“If you believe it, that’s only the second most painful sting in the insect kingdom – the Executioner Wasp is actually number one. But trust me, it’s not something I would wish upon my worst enemy”, Peterson explained in the interview.

The “murder hornet”, which is usually native to East and South Asia, was firstly spotted in the US states of Washington in early December by Jeff Kornelis, who rushed to contact the local authorities when he spotted a giant dead creature on his porch, a recent report by the New York Times revealed.

According to the state of Washington's Agriculture Department, these menacing insects can deliver large doses of venom with their stings, which can be potentially fatal when a large number of stings is sustained by a person. They are also well known for decapitating bees, thus posing a real threat to the beekeeping industry.

However, Coyote Peterson, who has experienced a sting from a giant hornet during his adventurous career, remained optimistic on the matter, arguing that the lethality of the insect’s stings does not so much depend on their numbers but rather on the particular reaction a person’s body could have to their venom, including an allergic shock. The wildlife educator thus criticised the hype around “murderous hornets” posing a danger to humanity, suggesting that the only people that should be really concerned are American beekeepers, due to the absence of a real defence system against the invaders.

“We have confirmed one single hornet, that, keep in mind, is also dead at this point, so that doesn't mean that there [are] hornets out there spreading”, Peterson argued. “So the odds of these hornets breeding and spreading across the United States is very unlikely to happen at this point”.

Peterson noted that local entomologists will continue doing an “extensive” amount of research into the matter, which will hopefully prevent any shocks or even an extermination of bee populations across the United States.