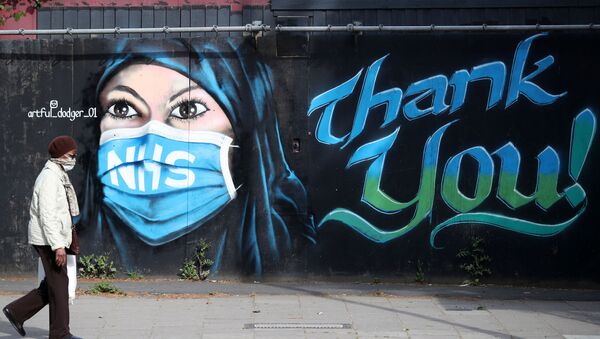 Demond Cureton
All materialsWrite to the author
Frontline healthcare workers are facing a spike in mental health concerns due to the ongoing COVID-19 pandemic, according to a major UK think tank report.

Mental Health for Frontline Health and Care Staff, by the Numbers

A joint YouGov-IPPR survey found that mental health was the most frequent problem, and over four out of 10 healthcare workers, or 42 percent, felt Downing Street was not doing enough to support workers, compared to 30 percent saying it was.

The eight-week survey also asked what the government should prioritise in the coming weeks, where 60 percent of frontline staff said an increase in mental health support, third after 84 percent backing stronger efforts to protect and test workers and 65 percent saying staff should be recognised more for their work.

Staff working in hospitals, mental health trusts and those in the community sector or local authorities felt strongest that the government was not doing enough to back mental health needs at 43 percent, 53 percent and 49 percent, respectively.

Young professionals suffered the most, at 71 percent, with women being hit hardest by the pandemic than men, at 89 and 83 percent, respectively, namely due to childcare and family safety concerns.

But 32 percent of private sector workers, including low-paid subcontractors and agency staff at GPs and dentists, said they were felt the most insecure about their jobs, compared to 5 percent working in the public sector.

"The severe impact of disease outbreaks on the mental health of healthcare workers is well evidenced. Many will experience stress, anxiety, bereavement or trauma. This will be made harder by the impact of social distancing on their support network. Yet, many are not eligible for bespoke therapy – and will be forced to cope alone", the report read.

The Cost of Mental Health Stress

Prior to the ongoing pandemic, many professionals had been suffering from work-related stress, statistics also revealed.

38 percent of NHS staff in England reported feeling unwell due to work-related stress, The IPPR said, citing a Health Education England survey in 2019. Mental illness had also cost between £1,794 to £2,174 per healthcare employee.

Around 35 percent of social care workers used alcohol to cope with stress and 56 percent said they were emotional exhausted, with around 63 percent stating they had difficulty sleeping, a Community Care survey found.

Comments on Working Conditions Amid COVID-19

Workers in the report commented on numerous problems within the pandemic efforts, with one revealing that workload and hours had skyrocketed due to more patients and staff taking sick leave.

The worker said: "Staff having to take on jobs/new roles that they are not experienced in and responsibilities they are under qualified for. In order to provide adequate cover rotas are no longer compliant with previous legal rules put in place. All of this is exhausting and over time is likely to cause burnout.

"There is a dread of coming to work because of how stressful it is likely to be and there is the anxiety/fear of knowing this is just the beginning and is likely to get worse and last several months," they added.

Inadequate personal protection equipment (PPE) was "causing a lot of anger", the worker said, adding the only positive was a "sense of normalcy by being able to come in to work and see and talk to colleagues".

Another professional said that staff needed help with childcare and accommodation amid the crisis, with travel costs potentially increasing due to staff having to "drive or take taxis to work due to reduced public transport".

The professional said: "With changes in rotas etc there is a possibility of staff having financial difficulties if payroll isn’t sorted. Wellbeing will be seriously impacted by not being able to see loved ones and partners, who would usually be the ones to support us. I’m not able to see my partner as we live separately and that is really tough. I understand why the measures are in place but it does make the thought of the next few months much harder.”

News of the findings come after New York doctor Lorna Green took her own life after colleagues raised concerned about her mental health. Her body was found shortly after returning to Charlottesville where she stayed under family care.

Global healthcare workers struggle to tackle the ongoing Coronavirus pandemic, which has surpassed 3.6m cases and resulted in over 252,000 deaths, with 32,000 in the United Kingdom and nearly 25,000 deaths in the state of New York, according to figures.