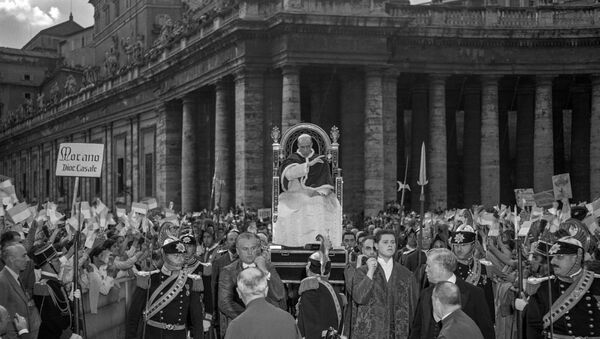 Despite the intriguing nature of their discoveries, the researchers are still working on determining the exact context of Pope Pius XII's actions during World War II and the Holocaust.

Historians studying documents that were stored in the Vatican Archives have apparently managed to establish when Pope Pius XII learned of the atrocities committed by the Nazis during Holocaust, and what exactly his advisers suggested to him in relation to that subject, Smithsonian reports.

As the magazine points out, the legacy of Pius XII, who was the head of the Catholic Church during World War II, has been "clouded with controversy" due to his silence on the matter of the mass murder of Jews by the Nazis.

And earlier this year, historian Hubert Wolf of the University of Münster and a team of German academics were able to conduct research in the Vatican's archives just before the latter was shut down due to the COVID-19 pandemic, uncovering a number of documents which, as Religion News Service’s Tom Heneghan put it, "do not look good for Pius or the Catholic Church."

It turns out that on on 18 September, 1942 an eyewitness report of “incredible butchery” of Jews in Warsaw was received by the pope's assistant, the future Pope Paul VI, about a month after the arrival of a similar report detailing the atrocities in the Lviv Ghetto.

But when the US envoy to Vatican later asked if the Church could corroborate the accounts of mass killings in Warsaw and Lviv, Vatican Secretary of State Luigi Maglione reportedly stated, "I don’t believe we have information that confirms this serious news in detail."

Also, the research team reportedly uncovered a memo from a Vatican staffer that "warned against believing the reports, dismissing these accounts on the grounds that Jews 'easily exaggerate'."

"This is a key document that has been kept hidden from us because it is clearly anti-Semitic and shows why Pius XII did not speak out against the Holocaust," said Wolf.

He noted, however, that researchers are still working on determining the context of the pope's actions back then.

"We have to first check these newly available sources," Wolf said, as quoted by the media outlet. "If Pius XII comes out of this study of the sources looking better, that’s wonderful. If he comes out looking worse, we have to accept that, too."