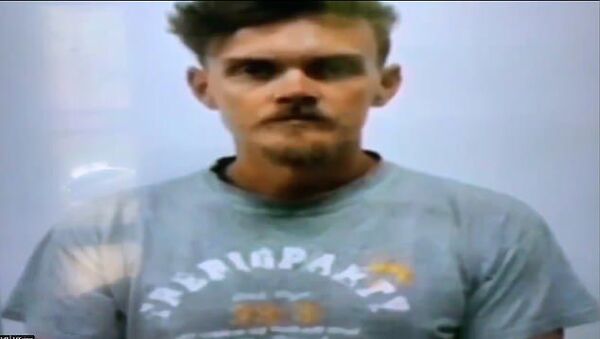 © Photo : Screengrab from Venezuelan television.
Subscribe
Ilya Tsukanov
All materialsWrite to the author
The Venezuelan military thwarted an attempted naval invasion by heavily-armed mercenaries coming from Colombia on Sunday morning, neutralizing multiple fighters and capturing at least two US nationals among them. More mercenaries have surrendered in the days since.

Venezuelan television has broadcast footage of the confession of Silvercorp USA mercenary Luke Alexander Denman, one of the US citizens captured in the aftermath of Sunday's botched raid. According to the mercenary, the plan was to kidnap Venezuelan President Nicolas Maduro, get him on a plane and take him back to the United States for prosecution.

Speaking to his interrogator, Denman explained that the mission was "to meet Venezuelans in Colombia, train them and come with them to Venezuela to secure Caracas and secure an airport here for follow-on."

"The instructions that I received...was to ensure that we took control of the airport for safe passage of Maduro," he says later in the interview.

In Venezuelan custody, ex-Green Beret and Silvercorp mercenary Luke Denman confirms contract with Juan Guaido, says plan was to kidnap Venezuelan Pres. Maduro and fly him to the US as a captive #BayOfPiglets pic.twitter.com/hg46mbBfRz

Denman said that he flew to Colombia on January 16 after being contacted by Silvercorp USA CEO Jordan Goudreau. The mercenary said he did not initially receive many details about his mission, and indicated that he expected to be paid between $50,000 to $100,000.

Denman, an ex-Green beret, indicated that there were about 60-70 people involved in the operation in total, forming into groups of about 20 people each.

Along with Denman, Venezuelan television broadcast footage of his alleged co-conspirator, US national Airan Berry. A video released by authorities on Tuesday showed Denman and Berry after they were captured by Venezuelan special forces. Venezuelan President Nicolas Maduro later held up the men's identification cards during a television address.

Caracas reported the foiling of an attempted naval invasion on Sunday. In the days that followed, authorities announced the detention of more suspects. On Wednesday, Telesur reported that a mercenary surrendered himself to Venezuelan fishermen on the coast of the state of Aragua. The man was said to have been turned over to local authorities.

Before that, 13 mercenaries, including Denman and Berry, were arrested along the coast. In the Sunday raid, authorities reported the liquidation of eight mercenaries, and the apprehension of two more, one of them alleged to be a US Drug Enforcement Administration agent.

Silvercorp USA CEO Jordan Goudreau claimed responsibility for Sunday's failed seaborne mercenary invasion, releasing a video in which he posed alongside a retired Venezuelan army captain supporting the plot to topple Maduro where he said that his men were "continuing to fight right now." Goudreau recorded the video from Florida, well out of harm's way.

According to the private military contractor, opposition leader and self-proclaimed 'interim president' of Venezuela Juan Guaido hired his firm to take part in an operation against Maduro, but the money never arrived, forcing his mercenaries to collect donations from Venezuelan migrants living in Colombia instead.

The White House has denied any involvement in the mercenary plot, with President Trump telling reporters Tuesday that the arrest of the two US nationals allegedly involved "has nothing to do with our government." Colombia has similarly dismissed any connection to the botched operation.

The US slapped Maduro with 'narco-terrorism' charges in March, posting a $15 million reward for his capture or prosecution.

000000
Popular comments
Execute them in front of a camera. It will be more appropriate if President Maduro himself were to fire the first shot.