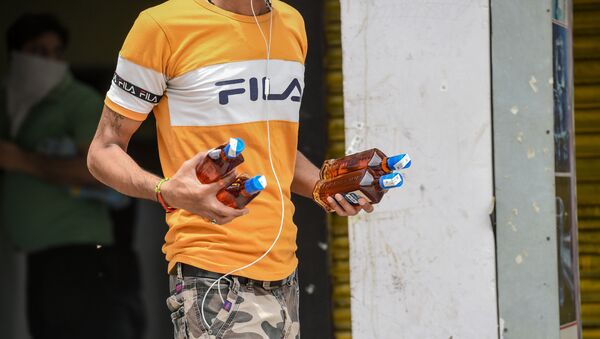 New Delhi (Sputnik): People continued to swarm outside liquor shops in India as they opened for the third day since 24 March. The government’s order— to permit liquor stores to open on 4 May amid coronavirus pandemic— generated debate as some opined that the move could do more harm than good.

From a one-on-one fight to people talking to statues, the videos emerging on social media perfectly sum up the after-effects of liquor sale relaxations in India. The government had ordered the opening of liquor stores in India after a 41-day absolute shutdown.

A video shows a drunken man in intense conversation with statues which were stationed at a junction. The man soon turned violent over the ongoing scenario and slapped the statues, hurling abuses at them.

In another video, an intoxicated man lies in the street but gets up swiftly, and claims he's the coronavirus. “My name is corona. I am viral," said the man in Hindi while dancing through the streets.

A video of an inebriated man attempting to hit an autorickshaw driver has attracted hilarious reactions on social media:

Meanwhile, people are showing their enthusiasm to hoard liquor, as evident from video that shows people remaining undeterred in hailstorms in Nainital, a town in the Himalayan state of Uttarakhand.

​India is currently under the third phase of its lockdown till 17 May but the government further eased the world's biggest shutdown to contain the COVID-19 in the country. The relaxations were applied to IT offices, the agriculture sector, industry, construction and offices, which will operate with one-third capacity.