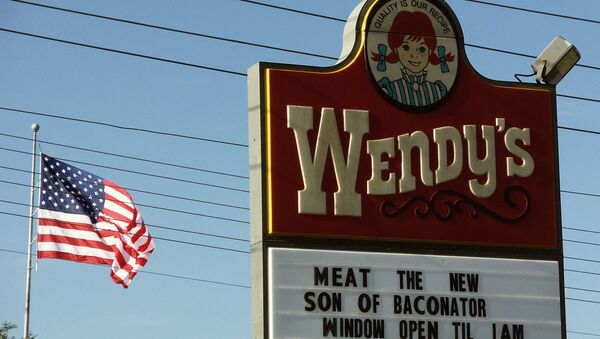 © Flickr / Daniel Oines
Subscribe
Hundreds of Wendy's fast food restaurants across the US are out of hamburgers, while supermarkets like Kroger and Costco have placed limits on the amount of meat that customers can buy, as dozens of meatpacking plants have shuttered due to the COVID-19 pandemic, leading to a meat shortage.

A report by the New York Times, citing financial firm Stephens, reveals that 1,043 Wendy’s restaurants in the US - equivalent to about one-fifth of the chain’s locations - were completely out of beef products on Monday.

“It is widely known that beef suppliers across North America are currently facing production challenges,” a Wendy’s spokesperson said in a Tuesday statement. “Some of our menu items may be temporarily limited at some restaurants in this current environment.”

The company’s hamburger shortage may be due to the fact that Wendy’s uses fresh beef.

“It impacts them more quickly, as opposed to some restaurants that have a little bit more frozen options on the menu,” James Rutherford, an analyst at Stephens who wrote the report on Wendy’s, is quoted as saying by the New York Times.

The report also found the impact varied depending on geographic differences. In states like New York, Connecticut, Ohio and Michigan, 30% or more of the chain’s locations were out of beef. However, Wendy’s restaurants in states like Nevada and Arizona did not experience any shortages.

The Wendy’s hamburger shortage has led several customers to ask “Where’s the beef?” online - referring to a Wendy’s catch phrase from the 1980s that was intended to poke fun at small burgers sold by other fast food restaurants.

However, not all restaurants are experiencing similar issues. McDonald’s on Tuesday revealed it has not experienced any meat shortages. Shake Shack representatives, on the other hand, said this week that the price of beef had “significantly increased.”

“We do not, today, expect a supply issue. However, costs have really jumped,” Shake Shack CEO Randy Garutti announced Monday during an earnings call, the Times reported.

In addition, grocery stores like Costco, Kroger and Hy-Vee announced limits on meat purchases this week, only allowing customers to buy four or fewer packages of fresh beef, ground beef, pork and chicken.