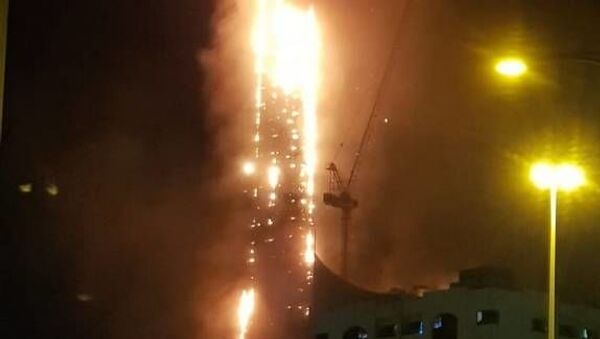 All residents from the Abbco Tower skyscraper apartment building and neighbouring buildings, located in UAE's third largest emirate Sharjah, have been safely evacuated, and seven minor injuries have been reported.

The skyscraper Abbco Tower in Sharjah's al Nahda, United Arab Emirates, caught fire on Tuesday, local media reported, citing Sharjah's Civil Defence Department. A fire broke out in one of the residential buildings. The residents were evacuated safely, as well as the tenants of neighbouring buildings.

The skyscraper is 48 stories, all damaged by the fire. Several fire engines were seen on site trying to put out the blaze, and drones were also used to observe and explore the damage on some floors, Emarat Al Youm newspaper reported.

Sharjah Government media office said in its Twitter account that the fire resulted in seven minor injuries, and all those injured were taken to hospital to receive the treatment.

​A tweet reads: A press release issued by the media office of the Sharjah government confirmed that the civil defence teams in Sharjah were able to control a fire that broke out in a residential tower in Al Nahda area. The fire accident resulted in 7 people with minor injuries who are taken to the hospital to receive the necessary treatment.

Several videos of the disastrous fire were shared on Twitter. The skyscraper is located next to a Taj Bangalore restaurant.

A fire broke out in a building in a residential building in Sharjah's Al Nahda area next to Taj Bangalore Restaurant. Several fire engines were seen on site trying to bring the blaze under control. Tenants of the building and that of neighbouring ones have been evacuated safely. pic.twitter.com/kWAOIbYXgO

The UAE has suffered a spate of fires in its high-rises, especially in the hot season, when the air temperature exceeds 40 degrees Celsius (104 degrees Fahrenheit). One of the strongest blazes broke out on New Year's Eve in 2016 in a high-rise hotel in the business centre of Dubai, during the New Year's fireworks.