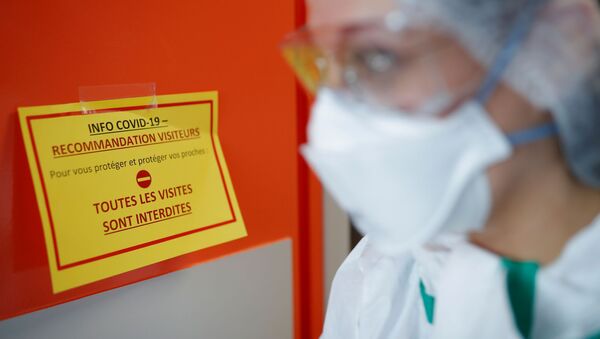 The patient is said to have infected two members of his family during a 15-day struggle with the COVID-19 coronavirus disease. French health authorities are reportedly carrying out a tracing investigation to see whether he was the first person to bring the the novel virus into the country.

A French hospital has found out that it had treated a COVID-19 patient on 27 December 2019, approximately one month before France’s Ministry of Health announced the first virus infections in the country, said Yves Cohen, head of resuscitation at the Avicenne and Jean Verdier hospitals in Paris, to the French BFM TV channel on Sunday.

The discovery was made after the hospital retested samples from 24 patients treated with the flu in December 2019 and January 2020. The samples have been retested multiple times to ensure accuracy and one tested positive for the coronavirus.

The doctor said that it is too early to assume whether this patient was the country’s “patient zero”, noting that a tracing investigation is undergoing.

“He was sick for 15 days and infected his two children, but not his wife, who works in a supermarket,” Cohen said. “He was amazed. He didn’t understand how he had been infected. We put the puzzle together and he had not made any trips. The only contact that he had was with his wife”.

Cohen said that the wife of the patient, who had never been to China, worked at a sushi stand in a supermarket with Chinese colleagues. The health expert said that authorities would investigate whether those Chinese workers had recently traveled to China.

“We’re wondering whether she was asymptomatic,” he said. “He may be the ‘patient zero’, but perhaps there are others in other regions. All the negative PCRs for pneumonia must be tested again. The virus was probably circulating.”

On 24 January, France confirmed its first three COVID-19 infections, one of which was in Paris, along with two others in Bordeaux.

On 31 December, the Wuhan Municipal Health Committee informed the World Health Organisation (WHO) of 27 “cases of pneumonia of unknown etiology [cause]” detected in the Chinese province of Wuhan.

On 30 January, WHO declared the coronavirus outbreak a “Public Health Emergency of International Concern”. On 11 March the UN agency declared COVID-19 a pandemic after over 118,000 people had been infected worldwide.

As of Monday, France has registered 169,583 coronavirus-related infections, of which 25,204 have died, according to data assembled by Johns Hopkins University.

Globally, the overall number of people infected with the virus has topped 3.5 million, with over 251,500 deaths.