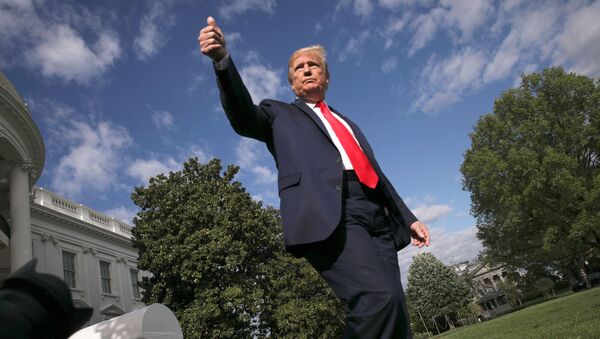 © REUTERS / CARLOS BARRIA
Subscribe
A Norwegian journalist wondered whether Americans who voted Trump in 2016 are going to regret it as much as the Germans who voted for Hitler in 1933 did in 1945, as the Third Reich came tumbling down.

Journalist Helge Simonnes, the former editor-in-chief of the Christian newspaper Vårt Land, has ruffled many feathers by drawing a startling parallel between Donald Trump and Adolf Hitler.

In his opinion piece in the newspaper Dagsavisen, titled “A Tarzan Against Corona”, Simonnes wondered whether Americans who voted Trump in 2016 are going to regret it as much as the Germans who voted for Hitler in 1933 did in 1945, as the war ended in bitter defeat.

“What did the Germans think at the time of defeat about what they had done 12 years prior? In the 1933 parliamentary elections, nearly 44 percent of German voters supported Adolf Hitler's party. A good number of them were active churchgoers. The consequences were terrible for Germany and for the the entire world. In May 2020, it is relevant to ask a similar question. What do American voters think about the support they gave to Donald Trump in November 2016?”, Simonnes wrote.

Simonnes expanded his comparison and further narrowed the question to Christian voters:

“The question must be addressed specifically to all the white, evangelical voters who voted for Trump. The support of 80 percent of this important group in American politics was crucial to his being in the White House. He was proclaimed to be a strong man, one who could defend the country through thick and thin, both against the liberal elite within the US and against external enemies. A Tarzan who skilfully played on the benefits of having Our Lord in the White House,” Simonnes wrote.

“However, much like German voters in 1945, there must be many Americans now who feel like they've been cheated. Maybe they feel Trump shame. Did they want a president who despises medical expertise and regularly puts forward alternative and special theories about the solution to the pandemic that China is claimed to have inflicted upon the US?” Simonnes asks.

However, Simonnes' poignant similes sparked a strong reactions among the readership. Many found the Hitler comparison distasteful and overblown.

“Your Hitler card was rejected by the payment terminal. Try another card,” a reader scoffed on Dagsavisen's Facebook page.

“Yet another brain-dead Hitler analogy. Helge Simonnes should be ashamed!”, another one mused.

“Imagine how mainstream media managed to brainwash so many into hating a man they probably know very little about. Another four years of irrational hatred in the media. Well, Trump brings the hypocrites to light and puts the idiots in place,” another one joined in.

Another reader wrote of “this clan of socially destructive journalists and editors, who don't act as a journalist but only as a political agitator for the left-wing extremists”.

Others, by contrast, were supportive of the comparison and critical of Trump, some even calling him “orange man”, “inept fool and clown” and “narcissist liar”.

“If you don't think Trump is a repulsive psychopath then you have either a clinical inversion of reality or a personality disorder. No point in discussing with the cultists,” one reply said.

Simonnes edited Oslo-based Vårt Land, one of Norway's largest Christian daily newspapers, between 1990 and 2016. He is currently active with the Dagsavisen daily, which was owned by the Labour Party for over a century.