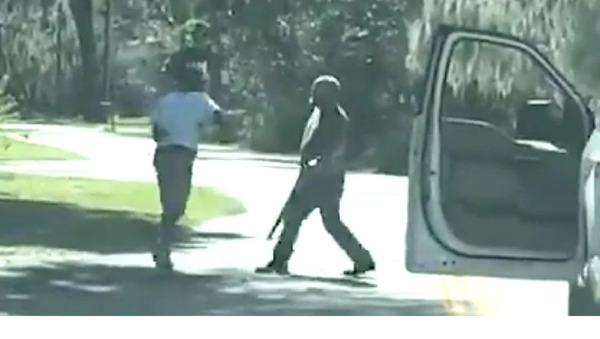 Newly surfaced cellphone video of the February murder of 25-year-old Ahmaud Arbery has prompted Georgia prosecutors to release evidence to a grand jury in an attempt to bring charges against the two men involved in the fatal encounter.

Footage of the incident, released Sunday by activist Shaun King on social media, shows Arbery running in the neighborhood of Satilla Shores in the coastal city of Brunswick, Georgia, on February 23.

​The footage, which King described as a “modern day lynching,” shows two men, later identified as Gregory McMichael, 64, and his son Travis McMichael, 34, chasing Arbery down and then shooting him because they believed Arbery might be a burglar.

The two men claim to have seen Arbery running in the neighborhood and armed themselves while chasing him in a truck. Gregory told police that he and his son believed that Arbery was a man who was recently caught on a security camera committing a break-in in the neighborhood.

"McMichael stated [that] the unidentified male began to violently attack Travis and the two men then started fighting over the shotgun at which point Travis fired a shot and then a second later there was a second shot,” a Glynn County Police Department report obtained by NBC News reads.

A former prosecutor who had previously looked into the case told police that the McMichaels acted within the realm of Georgia’s citizen arrest statute and fired shots in self-defense.

However, on Tuesday, Tom Durden, a Georgia prosecutor examining the case, revealed that he will have a grand jury hear evidence of the incident.

“I am of the opinion that the case should be presented to the grand jury of Glynn County for consideration of criminal charges against those involved in the death of Mr. Arbery,” Durden said in a statement Tuesday, the New York Times reported.

Durden also confirmed to the Times that no arrests have been made in connection to the shooting and declined to state what charges a grand jury would consider.

In an April 28 statement, the Glynn County Police Department said that the incident is subject to “an ongoing investigation” and that it “continues to gather and provide information to the District Attorney’s Office that the case has been assigned to.”

John Perry, a Brunswick pastor and president of the local chapter of the National Association for the Advancement of Colored People (NAACP), told the Associated Press that he was glad the case would be sent to a grand jury.

“It's very problematic. To shoot and kill and not get arrested, it doesn’t compute,” Perry said.

Arbery’s family has hired civil rights attorney Lee Merritt to assist them in matters relating to the case.