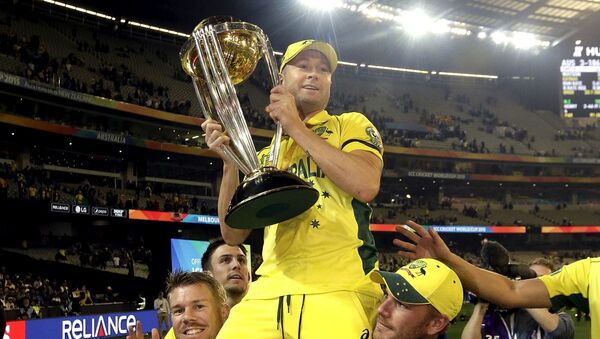 New Delhi (Sputnik): Australian Cricketer David Warner is making the most of his quarantine time on Tik-Tok, creating hilarious videos with his wife Candice and two daughters. From throwing challenges to his friends to dancing hit Hindi songs, Warner’s Instragram and Tik-Tok feed is lit.

The former vice-captain of the Australian national cricket team, David Warner, has shared a hilarious video re-enacting the song ‘When Mama Isn't Home’ with his wife and two little daughters.

While his wife Candice used a broom as a trumpet, Warner used a baking tray and his daughter employed pots, pans and even a mixing spoon as musical instruments to create an in-house band.

Warner had the equally hilarious caption for the video, saying: “When you know you have officially lost it in isolation!!”.

When you know you have officially lost it in isolation!! 😂😂 #canwegooutsidenowplease

Warner, who has over 2.6 million followers on Instagram and clocked 945,500 followers on TikTok just days after signing up, instantly became a hit among cricket-crazed Indians who already adore him for his performances for Sunrisers Hyderabad, a team in the Twenty20 cricket format known as the Indian Premier League.