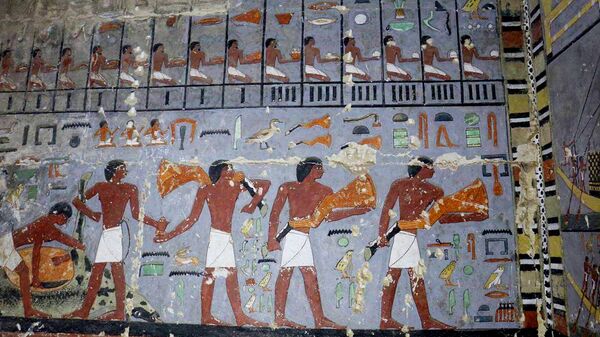 © AP Photo / Egyptian Ministry of Antiquities
Subscribe
International
India
Africa
The findings from the site include a mummy buried with jars containing the innards of the deceased, as well as a gilded silver mummy mask.

Archaeologists working at the remains of a necropolis located about 20 miles south of Cairo, have apparently uncovered new insights into millennia-old Egyptian burial customs, the Sun reports.

As the newspaper points out, the “city of the dead” was originally discovered back in 2018 and researchers have been studying it ever since, and the story of this burial complex will feature in "Kingdom of the Mummies", a new four part series by National Geographic.

"The evidence we uncovered shows the embalmers had very good business sense”, said Dr. Ramadan Hussein, archaeologist and leader of the dig team. "They re-used chambers and re-sold sarcophagi to maximize the capacity of the complex."

During their work at the site, archaeologists made a number of intriguing finds, such as a mummy buried with jars containing the organs of the deceased, a gilded silver mummy mask – apparently the first "seen in Egypt since 1939".

They also uncovered evidence of a "previously unknown cult that worshipped a snake goddess", as an inscription on three mummies found in the necropolis say the deceased were "Priests of Niut-Shaes", a goddess "thought to have taken the form of a snake" who had a "dedicated group of believers".

The researchers' work at the burial complex also offers a glimpse of what kind of funeral ancient Egyptians could receive, depending on how wealthy they were, the newspaper notes.