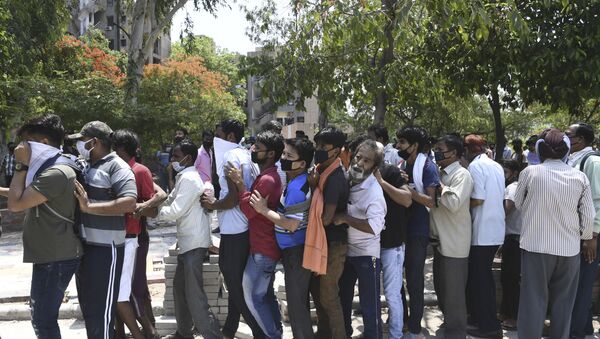 New Delhi (Sputnik): India has entered its third phase of countrywide lockdown. The initial two lockdowns brought the country to a standstill with only essential services allowed to function. However, the Indian government has permitted liquor stores to open since 4 May.

A  large number of local residents continued to line up outside liquor stores on Tuesday despite the Delhi government's order to levy 70 percent extra tax on liquor from Monday and despite growing concerns for their safety.

In one video, security forces can be seen asking hundreds of people to abide by social distancing rules for their own safety.

Justin : Hum Na manengee!!! This is despite the hike of 70 percent in the cost of all kinds of liquor. Second day of opened liquor store in Chandar Nagar in #Delhi. #Lockdown3 pic.twitter.com/BLa5MSQsi6

In another video, a drinker outside a liquor store remarked: "We've no issue with 70% tax. It's like a donation from us to the country". He also advised the security personnel to perform their duties to ensure that people do not break lines and that rules are respected.

#WATCH A man outside a liquor shop in Laxmi Nagar, Delhi says,"I'm here since 6 am. Shop was supposed to open at 9 am but police arrived at 8:55 am...who will be responsible if something untoward happens here? We've no issue with 70% tax, it's like a donation from us to country". pic.twitter.com/xnhycDLL4y

Another video shows a man showering flower petals on people standing outside liquor shops in the Chander Nagar area of Delhi. The man can be heard saying "You are the economy of our country, government does not have any money".

Economy savers being honoured in Delhi.
A man showering flowers on people standing outside liquor shops in Chander Nagar area of #Delhi. The man says, "You are the economy of our country, government does not have any money". #CoronaLockdown pic.twitter.com/o6yGMKI6cE

A video emerging from the Uttar Pradesh shows a man stating it feels like he has got his life back and thanking Prime Minister Narendra Modi and State chief Yogi Adityanath.

After a 41 day dry spell, the Indian government allowed the opening of liquor stores as alcohol taxes provide a large chunk of state revenue. On Monday, the police had to use mild force to disperse crowds who were seen violating the social distancing norms.