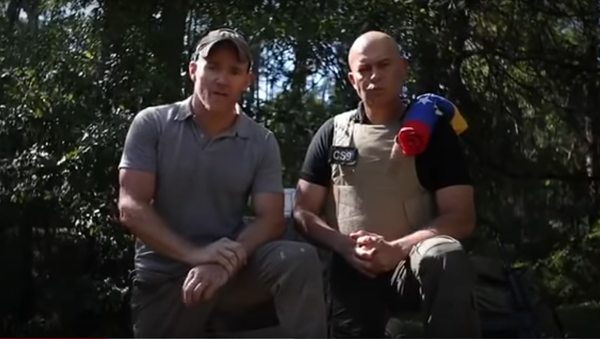 © Photo : YouTube / NoticieroDigitalcom
Subscribe
Venezuela’s armed forces were placed on high alert on Sunday after thwarting an attempted naval invasion by heavily-armed mercenaries coming from Colombia. Bogota and Washington have denied any involvement in the incident.

Jordan Goudreau, a retired Green Beret and CEO of private security contractor Silvercorp USA, has claimed that he was behind the disastrous Sunday morning attempt to mount a seaborne mercenary invasion of Venezuela.

Speaking alongside Javier Nieto, a retired Venezuelan army captain supporting the effort to topple the Maduro government, in a video uploaded to YouTube less than 24 hours ago, Goudreau confirmed that “at 17:00 hours, a daring amphibious raid was launched from the border of Colombia deep into the heart of Caracas.”

According to the mercenary, the operation was ongoing at the time of the recording. “Our men are continuing to fight right now. Our units have been activated in the south, west and east of Venezuela. Commander Nieto is with me, is co-located and commander [Antonio] Sequea is on the ground now fighting.” Sequea, a commander of the Venezuelan National Guard, was sacked from his position last year after taking part in a failed revolt against the Venezuelan government.

The AP believes that both Goudreau and Nieto are situated in Florida, well out of harm’s way. Goudreau says 60 of his men are on the ground in Venezuela, with coconspirators attempting to convince the army to join them.

The mercenary’s claims about an ongoing operation have yet to be verified, with the Venezuelan military saying only that it has been placed on combat alert “to react immediately to any threat.”

Venezuelan officials announced Sunday that a group of “terrorist mercenaries” from Colombia had attempted to infiltrate the country using speedboats with the aim of spreading chaos and, ultimately, overthrowing the country’s government. As many as 8 mercenaries are said to have been killed, with two others captured. Caracas says one of the captured men is a US Drug Enforcement Administration agent. The US has not commented on the claims.

The uploaded video comes days following revelations by the US media that Goudreau was involved in a separate operation to topple President Nicolas Maduro led by Cliver Alcala, a retired Venezuelan general currently held in US custody on narcotics charges. That coup attempt, said to have been financed by US-based billionaires, stipulated the injection of 300 ‘volunteers’ entering the country from the north, raiding military bases and inciting the public to revolt. Venezuelan authorities said they were apprised of the plot months ago.

According to Goudreau, opposition leader and self-proclaimed ‘interim president’ Juan Guaido signed an 8-page “general services” contract with his military contracting company Silvercorp USA in October 2019. A purported hidden video of the videoconferencing conversation between the mercenary and Guaido has been uploaded to YouTube. Its authenticity has yet to be independently verified.

Goudreau has since complained that Guaido gypped him, and that the money never arrived, with would-be mercenaries forced to collect donations from migrants living in Colombia instead.

The mercenary, who served several tours of duty in Iraq and Afghanistan as a special forces medic before leaving the military and founding Silvercorp USA in 2018, said he was prepared for any legal fallout he may face over his activities, but described himself as a “freedom fighter” willing to make sacrifices to help ‘restore democracy’ in Venezuela.

The US and Colombia have denied any involvement in Sunday’s botched invasion. On Sunday, a State Department spokesperson accused “the Maduro regime” of spreading “misinformation” to “shift focus from its mismanagement of Venezuela.” Guaido, meanwhile, announced that “what happened in Vargas [was] another distraction ploy” by Caracas.

Venezuela has been trapped in a political crisis which began in January 2019, when, shortly after President Nicolas Maduro was sworn in for a second term, Guaido proclaimed himself interim president of the country. The US and its Latin American and European allies immediately recognized Guaido as Venezuela’s legitimate leader, while Russia, China, and over a dozen other nations pledged their support for the democratically elected Maduro government. Caracas has described Guaido and US efforts as an ill-disguised attempt to carry out a coup d’état in the oil and mineral rich Latin American nation.

Sunday’s botched naval invasion is reminiscent of the Bay of Pigs invasion, the botched 1961 CIA-backed Cold War plot to land in Cuba to try to topple Fidel Castro’s Cuban government. That operation led to the capture of over 1,200 mercenaries, and the loss of two US supply ships and two bombers, and later prompted Havana to allow the deployment of Soviet nuclear missiles on the island in the hopes of preventing another invasion. That decision led to the Cuban missile crisis of October 1962.

000000
Popular comments
Another pathetic failed attempt from bloated, pompous westerners. "Goudreau says 60 of his men are on the ground in Venezuela" Bulls**t propaganda ploy.