US Treasury to Borrow $2.99Trln to Fund Economy Through COVID-19 Pandemic – Statement 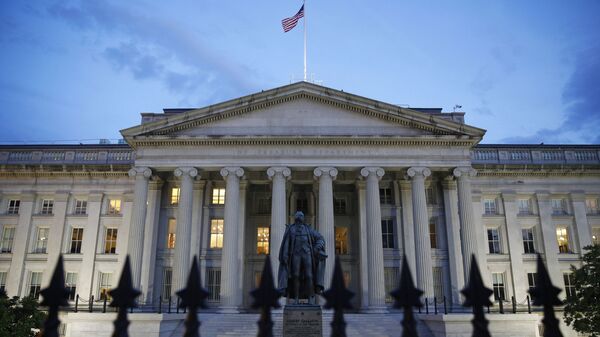 © AP Photo / Patrick Semansky
Subscribe
International
India
Africa
WASHINGTON (Sputnik) - The Department of the Treasury said in a statement on Monday that it will borrow nearly $3 trillion this quarter to fund the US economy through the novel coronavirus (COVID-19) pandemic.

The Treasury Department noted that its total estimated borrowing of $3.055 billion will be higher than the number previously announced in February.

The increase in privately-held net marketable borrowing was "primarily driven by the impact of the COVID-19 outbreak, including expenditures from new legislation to assist individuals and businesses, changes to tax receipts including the deferral of individual and business taxes from April – June until July," the statement said.

The United States has been worst affected by the COVID-19 pandemic with nearly 1.2 million infections and more than 68,000 COVID-19-related deaths.