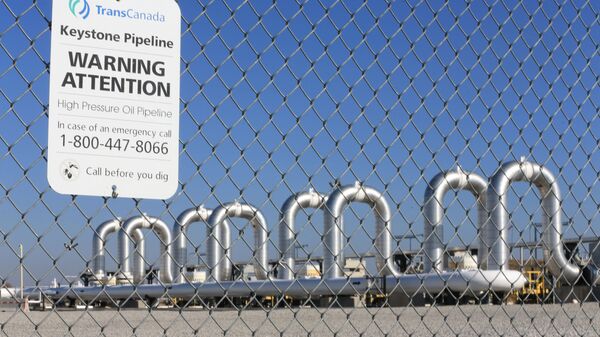 © AP Photo / Nati Harnik
Subscribe
International
India
Africa
WASHINGTON (Sputnik) - Volumes of oil processed by US refineries into gasoline and other petroleum products fell by more than 20 percent in the past month as nationwide stay-at-home orders made rush-hour traffic disappear and cut routine travel to a trickle, the Energy Information Administration (EIA) said in a report on Monday.

"US refineries have reduced the amount of crude oil and other inputs that they process (also known as refinery runs). US refinery runs fell for four consecutive weeks, reaching 12.8 million barrels per day (b/d) in the week ending April 17, and increased slightly to 13.2 million b/d for the week ending April 24, or nearly 21% lower than the previous five-year average for this time of year," the report said.

From 13 March , when a national emergency was declared in the United States, gasoline use has fallen to some of the lowest levels since EIA began tracking data in 1991, the report also said.

For example, since the week ending 3 April, gasoline supplied by refineries averaged 5.9 million barrels daily, about 37 percent lower than the previous five-year average for the month, the report added.

Production of other products such as jet fuel and diesel fuel suffered similar declines, according to the report.