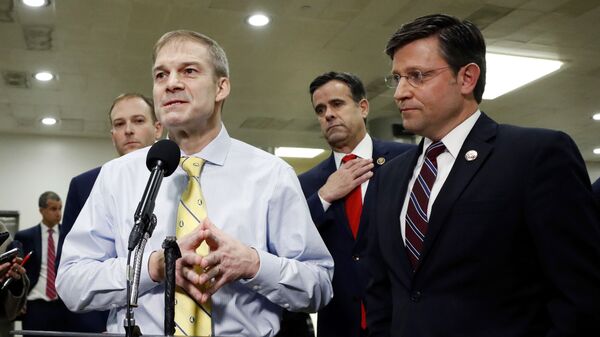 US officials have repeatedly suggested that the coronavirus (COVID-19) is of artificial origin. On Sunday, US Secretary of State Mike Pompeo claimed that is “enormous evidence” that the deadly virus came from a laboratory in the Chinese city of Wuhan.

A group of seven top Republicans from seven US House of Representatives committees said on Monday that they would launch an investigation into Chinese influence in American universities and colleges over fears that Beijing is stealing research and concealing data related to the origins of the COVID-19 pandemic.

In a letter to US Secretary of Education Betsy DeVos, the House GOP lawmakers asked for information about Chinese investment in US universities, as part of Republican efforts “to investigate the Chinese government’s propaganda and cover-up campaign” surrounding the coronavirus pandemic.

“Recent revelations of China taking steps to suppress academic research into the origins of the COVID-19 pandemic underscores the importance of your efforts,” the lawmakers wrote. “We write to seek a better understanding of the Department’s efforts to address unreported foreign direct investment into the US higher education system. This joint inquiry is in furtherance of Congressional Republican’s efforts to investigate the Chinese government’s propaganda and cover-up campaign surrounding this pandemic”.

The representatives, led by ranking House Oversight Committee member Jim Jordan, assert that they are worried about the potential for China to use its strategic investments “to turn American college campuses into indoctrination platforms for American students”.

“We cannot allow a dangerous communist regime to buy access to our institutions of higher education, plain and simple. The Chinese Communist Party’s coverup of the early outbreak of the coronavirus immeasurably worsened this disease’s impact on the United States and the world. We owe it to the American people to hold China accountable and to prevent them from doing further harm to our country,” Jordan said in a statement.

The letter was signed by the following US House ranking members: Virginia Foxx of the Education Committee, Michael Rogers of the Homeland Security Committee, Frank Lucas of the Technology Committee, Devin Nunes of the Intelligence Committee, Marc Thornberry of the Armed Services Committee and Michael McCaul of the Foreign Affairs Committee.

On Friday, a letter obtained by The Wall Street Journal from the US Department of Education revealed that the department asked the University of Texas system (UT System) to provide all records of gifts from or contracts with a lab in the Chinese city of Wuhan, as part of Washington’s investigation into the possible origin of the coronavirus pandemic.

The administration of US President Donald Trump has repeatedly claimed that the virus originated in Wuhan, China. US Secretary of State Mike Pompeo claimed on Sunday that Washington has a “significant amount of evidence” to support its allegations.

Beijing has rejected the allegations, with a top Wuhan laboratory official denying any role in spreading the deadly infectious disease.

Earlier on Monday, the World Health Organisation (WHO) said it had not received any data from the US proving that the COVID-19 virus was not of natural origin.